Wednesday will be dry with good sunshine in most areas 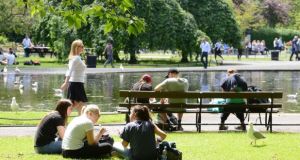 The weather is set to take a turn for the better tomorrow with temperatures as high as 25 degrees forecasted in parts of the country later this week. Photograph: Dave Meehan/The Irish Times

The weather is set to take a turn for the better tomorrow with temperatures as high as 25 degrees forecasted in parts of the country later this week.

Tuesday will continue to be a cloudy day, with outbreaks of rain or drizzle in many areas and some heavy rainfall in the southwest, Met Éireann has said.

Highest temperatures will generally be 14 and 17 degrees but it will be warmer in the east with highs of 17 to 19 degrees.

It will warm up on Wednesday, with a mostly cloudy start and some further patchy light rain and drizzle in places.

Overall, there will be a lot of dry weather with good sunshine in most areas during the day, with highest temperatures of 18 to 23 degrees generally but a degree or two cooler along Atlantic coasts.

Wednesday night will be mostly dry with some light drizzle in places, mainly in the north. It will be a mild night with lowest temperatures of 10 to 14 degrees.

Thursday will be warm with sunny spells, with highest temperatures of between 20 and 25 degrees. Some mist will linger in the morning, and it will be a mostly dry day, with some isolated showers developing during the day.

Generally, it will be clear on Thursday night, but further showers will move in from the south with heavy falls with thundery downpours possible.

On Friday, the showers will track northwards, mainly affecting the eastern half of the country with a continued risk of heavy and thundery downpours with spot flooding.

The showers will clear during the evening but rain will then begin to move in from the west, affecting all areas overnight.

It will be warm , with highest temperatures of 18 to 23 degrees and light to moderate southerly breezes.

The weather will continue to be warm on Saturday, with highs of between 15 and 20 degrees, but there will be a wet start to the day. By the afternoon, there will be showers coming in from the Atlantic which will merge into longer spells of rain.

Showers will continue to move in from the Atlantic on Sunday but they will be lighter and more scattered. The highest temperatures will between 14 and 18 degrees.

Current indications suggest that the start of next week will be more settled with mostly dry conditions.