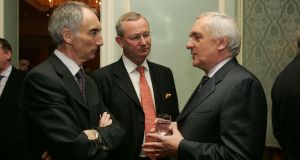 Maurice Healy, right: “I would like people who are giving to stand up and say they are giving.” Photograph: Alan Betson

Philanthropist of the year Maurice Healy has said other philanthropists should go public on the work they do even if they consider it “vulgar”.

Mr Healy (64), the chairman and chief executive of the family business, The Healy Group, said it was imperative for the purposes of transparency in the charitable sector and to encourage others that philanthropists should go public on their giving.

Mr Healy was awarded national philanthropist of the year by the Community Foundation of Ireland at a ceremony in Dublin.

He set up The Healy Foundation in 2009 to help a number of charities. He was nominated by Anam Cara which provides support services for bereaved parents and siblings.

The Healy Group also supports Social Entrepreneurs Ireland (SEI), Haven, the Haiti-based charity, the Irish Chamber Orchestra and An Cosán which provides adult education and other services to women from disadvantaged areas, and is Ireland’s largest community education organisation.

Mr Healy said he understood why some wealthy individuals did not want to go public with their philanthropy but he suggested those reasons were “counterproductive”.

“I would like people who are giving to stand up and say they are giving. Vulgarity does come into it, but we need to encourage people who are not giving and the more examples we have of people giving, the better we feel about it,” he said.

He also said that there was a problem with transparency in the charitable sector and the public ought to know who was giving large sums to these charities, including philanthropists. “People want to give with certainty,” he said.

He also said that employees deserve recognition if their companies are involved in philanthropic projects.

The Healy Group is a distributor for manufacturers of food ingredients and chemicals based in Tallaght, Co Dublin, the UK and China. Mr Healy said the company gives 20 per cent of its profits to the foundation.

He declined to give an exact figure, but said it was in the hundreds of thousands of euro every year.

Mr Healy said he was approached by An Cosán for support and was happy to do so. The Healy Group has funded a number of degrees for the women involved.

Eithne Dunne (47) said the money provided by foundation was a “absolute godsend” when she started her BA degree in leadership and community development in 2011 at An Cosán. The degree is affiliated to IT Carlow.

She and her husband were both unemployed at the time. The foundation provided her with a scholarship for €2,000 to complete her degree. She graduated in 2014 .

“It was a huge amount of money when you are unemployed. Even if had been in employment, I would have struggled with the fees because part-time study is not funded,” she said.

Elaine Vince O’Hara (49) did the same degree in An Cosán with help from the foundation.

“The financial support made it more accessible for me as did the location of An Cósan. Both for the support I would not have done the degree,” she said.

Both now work in higher education provision with An Cosán.