‘We need a statesman, not a showman’: NI reaction to Boris 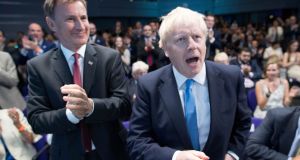 The DUP leader Arlene Foster offered her congratulations and said she looked forward to discussing with Mr Johnson the “shared objectives of strengthening the union, delivering Brexit and restoring devolution”.

The DUP deputy leader Nigel Dodds said Mr Johnson had the opportunity to “deliver the one thing that the country needs, which is to move beyond Brexit” and to get on with UK “domestic priorities”.

The SDLP leader Colum Eastwood said that the election of Mr Johnson was a “worrying step toward a hard no-deal Brexit and a hard border in Ireland”.

“Johnson has coasted into Downing Street on a wave of Brexit bluff and bluster. It won’t be long until he crashes into the rocky reality that the European Union will not sacrifice the interests of Ireland to appease a man who has lied and slandered its institutions in an effort to secure power,” he said.

Added Mr Eastwood, “All parties in the North must now set our combined efforts to resisting the impulse of this administration to drive off the Brexit cliff edge. The fragile complexities of political and economic relationships across this island cannot be placed on the altar of British nativism. Our struggle for peace and economic normalisation has been too long and too hard to be sacrificed for this.”

“There is now immense expectation as to the next steps the new prime minister will take and one of those must be the restoration of a functioning Northern Ireland Assembly,” he said.

“The Ulster Unionist Party is willing and able to work with Mr Johnson to ensure this happens but if that is unattainable in the short term, then he must move to ensure further critical decisions are taken by Westminster,” he added.

Mr Swann said the bottom line for Mr Johnson was “that any decisions he takes must be in the best interests of all of the United Kingdom and that includes doing everything possible to avoid a no-deal Brexit”.

He added, “I urge him not to allow nationalism in Northern Ireland or Scotland to exploit the current instability for selfish political interests.”

Alliance leader Naomi Long said what was required in the incoming prime minister was a “statesman, not a showman”.

“It is now vital as he takes up the reins as prime minister he demonstrates a level of leadership and seriousness which has been lacking to date. At such a critical juncture, we need someone who is detail focused and sensitive to the complexity of the challenges ahead,” she said.

She added, “Boris Johnson’s road to the Conservative Party leadership has been paved with destructive half-truths, bluster and outright lies, many of which helped precipitate the crisis from which he is now personally benefitting. With an impending no deal Brexit and the stark choices facing us, we need substantive answers from him to what are incredibly serious and complex questions.”

Ms Long said that do date Mr Johnson had “failed to demonstrate any real understanding of the needs of Northern Ireland, particularly in the context of Brexit and especially in a no deal scenario - needs that require more than merely a ‘can do’ attitude to resolve”.

She warned, “The Irish Border is a delicate and nuanced issue, with resonance far beyond trading arrangements and with the potential to unpick the fabric of the Good Friday Agreement if mishandled.”