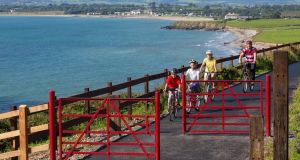 The Waterford Greenway is proving a major addition to the tourism infrastructure of the south-east, with over 90 per cent of the nearly 250,000 people who have used it since it opened earlier this year giving it a positive rating, a new survey has found.

According to the survey carried out for Waterford City and County Council, some 94 per cent of people who used the 46km walk and cycle path, which runs from the outskirts of Waterford city to Dungarvan, rated it as either “excellent” or “good”.

The Waterford Greenway Intercept Survey, which was conducted by Amarach Research for consultancy firm AECOM, found that almost two thirds of those using the greenway came from Waterford, with all but 2 per cent of the remaining users coming from elsewhere in Ireland.

Significantly, 80 per cent of those visiting from outside Waterford paid for accommodation. Almost one in five stayed four nights or more and 41 per cent of stayed overnight in hotels at an average cost of just of over €100 a night.

Dungarvan was the biggest draw, with 45 per cent of visitors staying there, opposed to 22 per cent in Waterford city and 29 per cent elsewhere in the county. The survey also those who spent money while on the greenway spent an average of €28.50.

The greenway, which runs along the route of the old Dungarvan to Waterford rail line, was developed by Waterford City and County Council. The council’s chief executive officer Michael Walsh welcomed the survey as “very encouraging”.

“Developing the greenway was a significant, but a very worthwhile investment that is having a major economic and social impact across our county, not just during the peak tourist months but right throughout the year,” he said.

“Waterford is the jewel in the crown along Ireland’s Ancient East and the Waterford Greenway has not just drawn visitors into our county but it has helped us all to take stock and appreciate the fantastic natural amenities we have on our doorstep.”

Visitors can travel from Waterford city along the River Suir by Mount Congreve Gardens, through Kilmacthomas, across eleven bridges, over three impressive viaducts and through a 400m long tunnel with wonderful views en route of the Comeragh Mountains and Dungarvan Bay, he said.

“Again and again visitors I’ve met along the route comment on the friendliness of locals and the varied landscape that stretches from the City to the mountains and down to the sea. It’s breath-taking and we’re only delighted to showcase it to the world,” he said.

Waterford city and county Mayor, Cllr Pat Nugent, said it was heartening to see so many local people using the greenway and particularly the 15 per cent of respondents who use it daily for walking, cycling or jogging.

Asked what people like most about the greenway, 70 per cent picked the scenery and nature while 51 per cent said being away from traffic was one of its attractions. More than a third said it was peaceful and quiet.

More than one in five were most interested in features such as the greenway’s tunnel and viaducts, while 18 per cent said its outstanding feature was the friendliness of those using it. Some 41 per cent of respondents said they could think of absolutely nothing they disliked about it.

Fifty-three per cent of respondents said their purpose was walking or cycling trips for exercise and 36 per cent said their key purpose was sightseeing or exploring. A large majority - 91 per cent - said they planned a loop or return journey to the starting point of their trip.