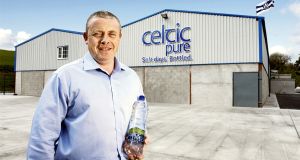 The Health Service Executive (HSE) has served a partial closure order on the water company at the centre of a product-safety recall over arsenic in its output.

The HSE served the closure order on production of spring and other waters from a specific well at Celtic Pure’s facility in Monaghan last week, according to a notice published on the website of the Food Safety Authority of Ireland (FSAI).

Water from the well in question was recalled from some of the largest retailers in the State in recent weeks after tests revealed levels of arsenic above the legal limit. Among the retailers which use Celtic Pure to bottle and supply their own-brand waters are Dunnes, Spar, Lidl, Aldi and Applegreen.

When contacted about the FSAI notice, Celtic Pure referred The Irish Times to their initial media notice, which stated that the recall notice “is the result of a mechanical failure of a filtration device which has been isolated to one of our many springs. The quality team has taken immediate action and removed this device and source and we can now confirm that this issue is fully resolved.”

A spokeswoman for the company insisted that Celtic Pure had already removed the well from production before the FSAI imposed its closure order. However, the order means that the food safety watchdog must now be satisfied that the well is producing safe products before allowing it to enter into production again, taking that decision out of the company’s hands.

It also means that the FSAI’s initial report into the well will be published next month, as part of the authority’s regular publication of the reasons underpinning its closure orders, which usually relate to conditions found at restaurants or other establishments that sell food directly to the public.

As reported earlier this month by The Irish Times, Celtic Pure was raided by the FSAI arising from a disclosure made to the agency by a former employee of the company. The raid, which saw the FSAI accompanied by members of the Garda, was associated with the arsenic issue, but the authority is also investigating a number of other matters. Celtic Pure has said the arsenic issue is “fully resolved”.

The company acknowledged that “in an entirely separate investigation, [it] has been working closely with the FSAI regarding a number of unsubstantiated allegations that were made by a former employee”, which it says it “absolutely rejects”.

Asked for comment on the closure order, the FSAI confirmed “that the Health Service Executive’s environmental health service served a closure order on Wednesday 14 August on Celtic Pure Unlimited Company, ceasing the production of all spring waters and the production of other waters from a specific well at Celtic Pure, Shercock Road, Co Monaghan”.

“This enforcement action is part of an ongoing investigation and the FSAI will not be commenting further at this time.”

Celtic Pure is a family-run business based in Co Monaghan. It was established in 2000, and in addition to supplying water to some of the largest retailers in the State it is also the official water of the Football Association of Ireland. The company was recently re-registered as an unlimited company, meaning less financial information is available about it.

However, its most recently available set of accounts show accumulated profits of €3.8 million. The company’s shares are held by an offshore entity, registered in the channel island of Jersey.