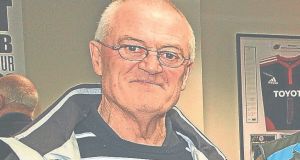 David Weldrick who died after getting into difficulty while swimming in Kilkee bay on Saturday. File photograph: Dave Gaynor

The man who died after being airlifted to hospital in a critical condition following a swimming incident in Co Clare on Saturday has been named locally as David Weldrick.

Aged 71, he was a PE lecturer at Thomond College for decades.

He was swimming in Kilkee bay when he was reported to be in difficulty shortly after 10am.

The Shannon-based Coast Guard helicopter, Rescue 115, was also tasked to the incident.

He was taken from the water on the western side of Kilkee Bay in an area know as Newfoundout and airlifted to University Hospital Limerick where he was later pronounced dead.

Mr Weldrick, who lived in Castletroy but was a native of Dublin, was involved with numerous sports clubs in Limerick, including Mungret Regional, Aisling Annacotty, Pike Rovers and Limerick Lawn Tennis Club.

The Limerick Leader reported that his claim to fame was achieving the unthinkable in 1978 - leading Thomond College to win Limerick’s first and only All-Ireland senior Gaelic football club title, having already claimed the Munster title and Limerick title that season. His side won a second county title in 1980.

All-Ireland-winning footballer and RTÉ pundit Pat Spillane was the captain of this team, when they beat St John’s of Belfast by 2-14 to 1-3.

Mr Weldrick was also one of the first analysts on the Sunday Game.

In a post on Twitter, University of Limerick (UL) described Mr Weldrick’s death as “very sad news,” and expressed condolences to his friends, family, and former colleagues. “He leaves behind a legacy of coaching excellence at UL. RIP,” the post said.