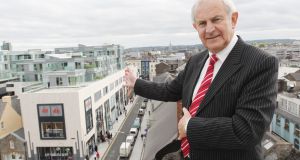 Tributes have been paid to one of the State’s biggest property developers, Owen O’Callaghan, who has died aged 76. Mr O’Callaghan played a central role in the regeneration of his native Cork and also built large commercial and residential projects in Dublin, Athlone and London.

He is best known as a central figure in the planning tribunal, where he was the subject of serious corruption allegations, which he always denied. He took a number of legal challenges to the inquiry and its findings, which resulted in many of its findings being overturned.

Lord Mayor of Cork Des Cahill led the tributes to Mr O’Callaghan whom he described as “a visionary whose legacy and impact on Cork will continue for many decades to come”.

“Owen O’Callaghan’s legacy will be with the city for decades ahead – he just didn’t build from the street, he had a much more holistic way of looking at things, he built quarters and communities.”

Cork Business Association’s Lawrence Owens said Mr O’Callaghan was a valued member of the organisation whose business acumen and counsel would be sorely missed.

Mr O’Callaghan, founder of O’Callaghan Properties, died in hospital in Cork after taking ill on Christmas Day. A native of Ballincollig, he worked as a chartered surveyor for Cork engineering firm, O’Connell and Harley in the mid-60s. He left in 1969 to set up his own company, which began by building houses and warehouses. By the early 1980s, he turned his attention to developing shopping centres.

He began by developing the Paul Street Shopping Centre in Cork and went on to develop Merchant’s Quay, Douglas Shopping Centre, North Main Street and Mahon Point in Cork. More recently, he developed Opera Lane in Cork city centre and was currently developing a major office complex at Albert Quay.

His developments, however, were not without controversy. In 1995, an attempt by CIÉ to sell an 17-acre site at Horgan’s Quay in Cork to Mr O’Callaghan became mired in allegations of cosy cartels after it emerged the site had not gone out to public tender. He withdrew from the deal and the site remained undeveloped for 20 years.

He also became embroiled in controversy over his development of the Liffey Valley Shopping Centre in Dublin. Developer Tom Gilmartin alleged Mr O’Callaghan told him he had paid Bertie Ahern £80,000 to block a tax designation for the Blanchardstown Shopping Centre, a rival to Liffey Valley, in Dublin.

Mr Ahern rejected the allegation while Mr O’Callaghan challenged the tribunal in the courts, going to the Supreme Court to gain access to statements by Mr Gilmartin. When the tribunal published its report, it accepted Mr Gilmartin’s evidence that he had been told by Mr O’Callaghan that he paid money to Mr Ahern but it also found it had not been proved that the payments had actually been made.

The tribunal did not accept Mr O’Callaghan was unaware of the “corrupt” activity of former Fianna Fáil lobbyist Frank Dunlop in paying councillors to back the rezoning of Mr O’Callaghan’s development of another centre at Quarryvale. It said he paid money to four councillors to ensure “their continued support and assistance” for the rezoning of Quarryvale between 1992 and 1993. He also paid the late Fianna Fáil TD Liam Lawlor £41,000 between 1991 and 1996, the tribunal found.

Mr O’Callaghan said he “utterly” rejected the findings of the tribunal, saying “the tribunal arrived at its conclusions based on procedures which by any reasonable criteria have been biased, unfair and unjust”. He took a judicial review of the planning tribunal report but lost in the High Court. The matter is currently under appeal to the Supreme Court.

His company was responsible for developing Golden Island in Athlone, Arthur’s Quay in Limerick and a shopping development in Carlow. He was also involved in two major residential developments at Hammersmith and Bermondsey in London. He emerged from the property crash relatively unscathed with just a small proportion of his loans taken over by Nama.

Mr O’Callaghan is survived by his wife, Shelagh, son Brian and daughter, Zelda. He was predeceased by his daughter, Hazel, who died in 2002 at the age of 22 after suffering a serious head injury during a showjumping accident.

Mr O’Callaghan’s removal takes place in Cork on Tuesday, with the funeral on Wednesday.