May accused of cover-up over Trident missile misfire 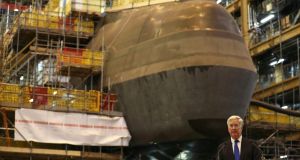 British defence secretary Michael Fallon at a nuclear submarine facility in October: he assured the House of Commons on Monday that “the capability and effectiveness of the United Kingdom’s independent nuclear deterrent is not in doubt.” Photograph: Phil Noble/WPA Pool/Getty

Opposition politicians have accused Theresa May of a cover-up after Downing Street confirmed that she knew about the misfiring of a Trident missile during a test before she called on MPs to renew the nuclear deterrent last year. Defence secretary Michael Fallon refused to discuss the test during a response to an urgent question on the issue in parliament on Monday afternoon or to confirm that a missile had misfired.

The Sunday Times reported this week that a missile may have veered off in the wrong direction towards the American mainland when it was fired off the coast of Florida during a test last June. Sir Michael said the test carried out last summer was a success because it showed that the nuclear-armed HMS Vengeance was fit to resume operations as part of the nuclear deterrent.

CNN on Monday reported that, according to “a US defence official with direct knowledge of the incident”, a missile test involving Trident ended in failure off the coast of Florida last year. Shadow defence secretary Nia Griffith accused the government of seeking to cover up the incident.

“At the heart of this issue is a worrying lack of transparency and a prime minister who’s chosen to cover up a serious incident, rather than coming clean with the British public. This house, and more importantly the British public, deserve better,” she said.

Ms May on Sunday repeatedly declined to say if she had known about the incident before she spoke about Trident in the House of Commons in July last year. On Monday, the prime minister’s official spokeswoman confirmed that, although the missile test took place shortly before she became prime minister, she was briefed about it on taking office.

Invoking national security, Sir Michael refused to tell MPs if the missile, which was not armed, had gone off course during the test.

“I can assure the House that the capability and effectiveness of the United Kingdom’s independent nuclear deterrent is not in doubt. The government has absolute confidence in our deterrent and in the Royal Navy,” he said.

The government has publicised successful Trident missile test on a number of occasions in recent years but Sir Michael insisted that such publicity was determined on a case-by-case basis.

“We do not give operational details of the demonstration and shake-down operation of one of our submarines conducting a test with one of our Trident missiles,” he said.

The Scottish National Party, which wants to scrap Trident, accused the government of “chilling complacency” in refusing to answer questions about the missile test. Defence spokesman Brendan O’Hara said the government had clearly withheld important information from parliament ahead of last July’s vote on renewing the nuclear defence system.

“If there was a cover up before the vote to renew this deadly weapons system – then that is completely unacceptable and if this government doesn’t understand that – then that is deeply worrying. Michael Fallon’s refusal to even acknowledge that this incident took place is all the more galling given that the US government have already confirmed this incident took place. Whatever confidence Westminster might have had in this repugnant weapons system is today deeply damaged,” he said.