Voters on the islands off the coasts of Donegal, Mayo and Galway are going to the polls one day ahead of the rest of the country. Video: Enda O'Dowd 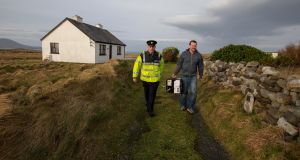 A garda and an election official carry a ballot box on Inishbofin where voting took place on Friday. Photographer: Colin Keegan/Collins

Voters go to the polls today after an election campaign which saw all parties claim they could meet a demand for change from the electorate.

About 3.5 million people are eligible to vote at 6,500 polling stations in 39 constituencies.

The most recent opinion poll, the Irish Times/Ipsos MRBI poll, put Sinn Féin out in front, followed by Fianna Fáil and Fine Gael, although the gap between the three larger parties has been relatively small.

Polls open at 7am and close at 10pm. The Irish Times will publish an exit poll as soon as voting ends at 10pm, giving the first indication of the outcome of General Election 2020. The results of the poll will be announced simultaneously at 10pm on irishtimes.com and on RTÉ One television. The poll, carried out by Ipsos MRBI, has been commissioned jointly by The Irish Times, RTÉ, TG4 and University College Dublin.

Heavy rain is forecast across Munster, Connacht and Ulster during Saturday afternoon. This will extend to remaining counties later in the evening, with risks of thunder and localised flooding.

The counting of votes begins at 9am on Sunday, with first counts expected from early afternoon.

Voters will elect 159 members of the 33rd Dáil which will have 160 seats, two more than the 32nd Dáil, with Ceann Comhairle Seán Ó Fearghaíl automatically returned in Kildare South. The new Dáil is due to meet on Thursday, February 20th.

At the dissolution of the last Dáil, Fine Gael had 47 seats; Fianna Fáil had 45, excluding Mr Ó Fearghaíl; Sinn Féin had 22; Labour, seven; Solidarity-People Before Profit, six; Green Party, three; Social Democrats, two; Independents4Change, one; Aontú, one; and Independents and others, 22.

One seat was vacant due to the resignation of former Fine Gael Cork North Central TD, Dara Murphy.

There are 516 declared candidates and 160, or 31 per cent, are women. Marese Skehan, an independent candidate in Tipperary, died after nominations closed.

On the eve of polling, Taoiseach and Fine Gael leader Leo Varadkar said forming a government could be difficult. He said nobody had predicted a “three horse race”.

“My fear is that a Fianna Fáil-led government or a Sinn Féin-led government, or the two of them in bed together. That could set us backwards, so people have a big decision to make.”

Fianna Fáil leader Micheál Martin has repeatedly ruled out a coalition with Sinn Féin and said he wants to form a government with Labour, the Greens, the Social Democrats and other like-minded parties.

“Fianna Fáil has the realistic, doable programme for a new government, particularly in terms of urgent action on the health services and housing with the building of new council and affordable homes.”

Sinn Féin leader Mary Lou McDonald said: “I have been talking to a lot of voters over the past few weeks, a lot of people want change and Sinn Féin is the vehicle for that change.”

Ms McDonald’s party is expecting a strong showing but, because it is only running 42 candidates, is unlikely to be in a position to lead a government.

While a polling card is not needed to vote today, all voters should bring identification.