‘I got my photo taken with Jack Lynch but Jack bought me no whiskey!’ 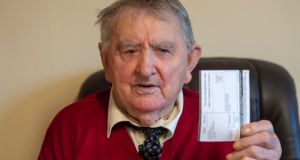 Paddy O’Mahony from Cullen, north Cork is 100 years old and preparing to vote in a general election for the 23rd time.

Born on Christmas Day, 1919 into an Ireland still under British rule, O’Mahony recalled how when he was growing up the shooting of Michael Collins in 1922 remained topical.

“My father was mad Fianna Fáil and my mother was a Fine Gael woman so I was an inbetween man and I kept a cool head and my vote secret,” the retired farmer said.

“There were two great men, de Valera and Cosgrave, on the go when I voted for the first time in 1943. I was 23 years of age. You had to be 21 years old to vote at that time and I cycled to Knocknagree to vote.”

He recalled meeting Éamon de Valera at the funeral of local Fianna Fáil TD and War of Independence hero Seán Moylan in 1957. Later he met former taoisigh Jack Lynch, Liam Cosgrave and Charlie Haughey when they came to Cullen canvassing.

“I got my photo taken with Jack Lynch when he came to Cullen in 1973 but a great friend of mine Tim O’Sullivan, who was a fierce Fine Gael man, called me into his house one day and I met Liam Cosgrave.

“Cosgrave brought us down into one of the pubs in Cullen and they were all Fianna Fáil pubs but he bought me a whiskey. I got my photo taken with Jack Lynch but Jack bought me no whiskey!”

As befits a man who still plays cards three times a week, O’Mahony is keeping his hand close to his chest when it comes to his voting intentions. He has positive things to say about both Leo Varadkar and Micheál Martin.

“Seán Moylan once said any government that leaves inflation go out of hand is a bad government. Fianna Fáil did great work but they left things get out of hand. They should have controlled the banks and they got their answer.

“But Micheál is fighting his way back and making a good fist of it, but at the same time Leo is doing a good job and Enda before him because when they took over, things were going out of control so ’tis between them it is.”

O’Mahony is a widower with four surviving children, 10 grandchildren and three great-grandchildren.