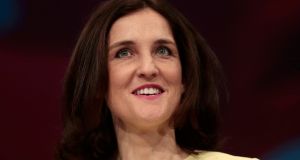 Northern Secretary Theresa Villiers who published a report into the status of the IRA and other paramilitary groups on Tuesday. Photograph: Reuters

A report into the status of paramilitaries in Northern Ireland has endorsed an assessment by the PSNI chief constable George Hamilton that the IRA still exists and that some of its members were involved in the murder of Belfast republican Kevin McGuigan.

The report found the IRA “remains in existence in a much reduced form” and that an IRA army council is still operating.

“The structures of PIRA remain in existence in a much reduced form. This includes a senior leadership, the Provisional Army Council, and some departments with specific responsibilities,” it added.

Following the publication of the statement DUP leader Peter Robinson said he would resume his post as Northern Ireland First Minister and bring back his Ministers, who had been boycotting Stormont, into the Northern Executive. He said Ministers would be back in work while the talks continued.

He said he wanted the issue of paramilitarism resolved in the current Stormont House talks. “We have a couple of weeks to save Stormont,” he said today.

“I don’t want to give the impression that because Ministers are going back into post that the issue is resolved. The big issue is getting resolved of how we deal with the existence of paramilitary organisations and how we can have the implementation of the Stormont House Agreement,” Mr Robinson told the BBC.

Mr Robinson added that it “really is a distinction without a difference to say there’s something special about the (IRA) army council being involved”.

“Does somebody think the people in the army council have different fingerprints than the people who are in the leadership of Sinn Fein? I don’t, never have,” he said.

“It is our firm assessment that PIRA’s leadership remains committed to the peace process and its aim of achieving a united Ireland by political means,” said the authors of the report.

“The group is not involved in targeting or conducting terrorist attacks against the state or its representatives,” they said.

Northern Secretary Theresa Villiers had commissioned the three-member panel to review PSNI Chief Constable George Hamilton’s assessment that the IRA still exists and that some of its members were implicated in the murder of Mr McGuigan, who was shot dead in east Belfast in August.

They were more broadly reporting on the status of all paramilitary groups based on information supplied by the PSNI and MI5 and, it is understood, the gardaí.

The murder of Mr McGuigan prompted a political crisis threatening the future of the Northern Executive and Assembly.

The report also found that at a “lower level” the IRA has “some regional command structures” and that “some activity takes place without the knowledge or direction of the leadership”.

The authors also found that notwithstanding what was viewed as full IRA decommissioning in 2005 that the IRA “continues to have access to some weapons”.

“We judge PIRA has not conducted organised procurement of new weaponry in the period since the last IMC (Independent Monitoring Commission) report of 2011,” they added.

They reported that IRA members believe that the Provisional Army Council (PAC) “oversees both PIRA and Sinn Fein with an overarching strategy”.

“We judge this strategy has a wholly political focus. PIRA members have been directed to actively support Sinn Fein within the community including activity like electioneering and leafleting,” they added.

“Individual PIRA members remain involved in criminal activity such as large-scale smuggling and there have been isolated incidents of violence, including murders,” they said.

“The investigation into the murder of Kevin McGuigan is still ongoing; however, we judge that the assessment put forward by the chief constable in his public statement on August 22nd remains accurate.”

Overall the panel found that all the main republican and loyalist paramilitary groups operating during the Troubles - the IRA, the Irish National Liberation Army, the Ulster Defence Association, the Ulster Volunteer Force, and the Red Hand Commando - “remain in existence”.

“Seventeen years after the 1998 Belfast Agreement paramilitary groups remain a feature of life in NI; the UDA, UVF and INLA continue to recruit and all of the paramilitary groups maintain a relatively public profile in spite of being illegal organisations,” the panel reported.

The panel said the majority of the paramilitary groups that they examined based on information from the PSNI and MI5 still had leadership structures. “These groups still organise themselves along militaristic lines and still use labels familiar from the Troubles, eg brigades or army council,” it added.

“These labels make the groups look more prepared for a campaign of violence than they are. Even in the highly unlikely event that the groups were minded to return to terrorism we judge they would be unable to resurrect the capability demonstrated at their peak.

“There are different levels of cohesion in the structures of these groups. However, none of the leaderships has complete control over the activities of its members; there is regular unsanctioned activity including behaviour in direct contravention of leadership instructions.”

Speaking on his way into Government Buildings before for the Cabinet meeting Taoiseach Enda Kenny said he would receive a briefing from Minister for Foreign Affairs Charlie Flanagan on the report.