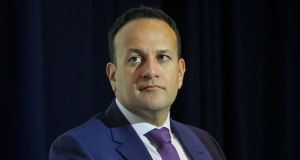 Pursuit of the border backstop has been a policy fraught with danger for Taoiseach Leo Varadkar. Photograph: Gareth Chaney/Collins

The pursuit of the border backstop, and an iron-willed insistence that it must be included in a Brexit withdrawal deal, has been a policy fraught with danger for Taoiseach Leo Varadkar.

If the emerging shape of the backstop is reflected in the final withdrawal agreement and – crucially – passed through the House of Commons, then the Government can claim a huge success.

The backstop – the insurance policy to avoid a hard Irish border if future EU-UK trade talks fail – will now see the entire UK enter into bare-bones customs union with the European Union, with additional measures on both customs and regulations for Northern Ireland.

Although the backstop’s primary intention was to avoid a hard border and protect the Belfast Agreement, it has now lassoed the UK into a much closer trading relationship, for the medium term at least, than most Brexiters wanted.

With the EU acceding to the UK request to enter into a temporary customs arrangement for Britain as a whole, and not just a Northern Ireland-specific measure, the final iteration of the backstop may protect crucial east-west trade between Ireland and Britain.

Brexit formally takes effect from next March, at which point the UK will enter into a transition phase which will see it remain in the European single market and customs union until the end of 2020.

The provisions of the backstop will then kick in if the EU and UK have not yet concluded a deal on a future trading relationship that will keep the Border open.

Agreeing a trade deal of that scope in such a short space of time is highly unlikely, leaving the UK with the option of extending the transition deal or activating the backstop.

And if the withdrawal agreement is passed by Theresa May’s cabinet and the House of Commons, not only will the backstop have kept the Border open and maintained frictionless east-west trade, for a while at least, it may also lay the ground for the future trading relationship.

The Irish Government has played its part in shaping the withdrawal agreement, through the backstop, into a document that is despised by large swathes of Westminster.

Dublin is treading a fine line between overreach and triumph, and only the British Cabinet and House of Commons can decide which outcome it is to be for Leo Varadkar.