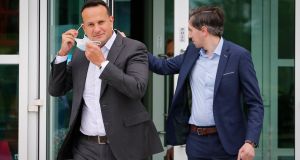 A spokeswoman for Tánaiste and Minister for Enterprise, Trade and Employment Leo Varadkar said the statutory increase due under the sectoral employment order for the construction industry would take effect from the beginning of October. Photograph: Crispin Rodwell/ The Irish Times

The Government has rejected suggestions from the constructions industry that it should intervene to defer pay rises due to thousands of building workers next month.

A spokeswoman for Tánaiste and Minister for Enterprise, Trade and Employment Leo Varadkar said on Wednesday that the statutory increase due under the sectoral employment order for the construction industry would take effect from the beginning of October.

Under the terms of this order construction workers are due to receive a 2.7 per cent pay increase on 1st October

It is understood that the Construction Industry Federation (CIF) asked Mr Varadkar at a meeting last week “to to use his office to defer the increase due in the current circumstances”.

It is understood that the Tánaiste declined to intervene and that the increase is now expected to go ahead in most cases.

Individual employers facing financial difficulties could invoke provisions in industrial relations legislation and apply to the Labour Court for a temporary exemption from the terms of the sectoral employment order (SEO) under its inability to pay clause.

The CIF told members that it would be applying to the Labour Court to amend the terms of the SEO to cancel the increase due. However, it said it acknowledged that that any amendment to the terms of the order could not be made before October 1st.

In a bulletin to members ahead of the meeting with the Tánaiste, the CIF said it would be “making a very strong case that any increase in labour costs will increase the cost of construction and put the future pipeline of work in jeopardy, at a time when the economy needs the construction industry operating at full capacity”.

The backdrop to the pay issue is the ruling by the High Court last June that declared that all sectoral employment orders (i.e. construction, mechanical and electrical) were invalid. This judgment came in a case taken by the National Electrical Contractors of Ireland (NECI) against the Minister, the Attorney General and the Labour Court.

On July 31st the High Court granted a stay on the construction and mechanical sectoral employment orders pending the outcome of the appeal by the State to the Court of Appeal / Supreme Court.

The CIF told members that the granting of the stay by the High Court “means that construction workers have a legal entitlement to an increase in pay and pensions of 2.7 per cent on 1st October next”.

It said its industrial relations sub committee had agreed following a recent meeting that that increasing pay in the current circumstances of Covid-19 would be detrimental to the industry and that every effort will be made to defer this increase.

“CIF members are working tirelessly to keep workers safe and sites open. There are currently 17,500 unemployed construction workers availing of the Pandemic Unemployment Payment and a further 9,600 are being supported through the Temporary Wage Subsidy Scheme. Increasing labour costs at this time will only serve to put future work in jeopardy, which in turn will result in further job losses.”