Varadkar says position on Brexit talks has not softened 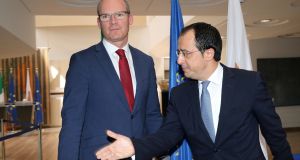 Taoiseach Leo Varadkar said the Government has not softened its position on the Brexit talks by conceding that any deal on the so-called backstop to avoid a hard border may not be agreed until October.

Mr Varadkar and Tánaiste Simon Coveney defended their position saying they have always said the deadline to conclude the withdrawal deal between the EU and UK, including the backstop, was October.

The Government has called on the British to show substantial progress on the Border issue by the European Council summit of EU leaders at the end of this month but have said that this was not a hard deadline for a deal on the Border.

Asked about the risk of no deal being reached given the impasse in talks between London and Brussels, Mr Varadkar raised the possibility of transition periods and extensions if faced with a disorderly Brexit.

“It is probably not helpful at this stage to talk about hypothetical scenarios,” he said.

The Government wants a backstop keeping Northern Ireland in the EU customs union and single market, which would protect the invisible border and ensuring alignment of regulations north and south of the Border - should the EU and UK fail to agree a trade deal or specific solution for the North.

Speaking at the launch of the Global Ireland 2025 report on doubling the Government’s “global footprint,” Mr Varadkar said the UK government’s paper proposing its own version of the backstop was a “small step in the right direction” but he could not accept a backstop that has “a hard deadline”.

London’s proposal offered some solutions on customs but did not have enough on regulatory alignment.

Mr Coveney, the Government’s lead minister on the Brexit negotiations, attempting to manage expectations around the June summit said it should not be built up “to something it isn’t.”

The Government announced plans to open embassies in Ukraine, Morocco, The Philippines and Liberia in the coming years and consulates in Cardiff, Frankfurt and Los Angeles from next year.

Mr Coveney said the new embassies were “high potential location for increased trade for Irish companies but also key parts of the world where Ireland’s voice is not as strong as it needs be.”

The overseas expansion fulfils a proposal made by Mr Varadkar made during last year’s Fine Gael leadership election. The Government intends to open 26 new embassies and consulates over the next seven years, adding to the existing network of 80 diplomatic missions staffed by 678 diplomats across the globe.

The move comes against the shift to protectionism and unilateralism by the US under President Donald Trump and rise of economic nationalism that led to Mr Trump’s election and the UK’s vote for Brexit.

“We are at a moment in world history where we can turn inwards and become irrelevant or we open ourselves to opportunities and possibilities on a global scale that we never had before,” said Mr Varadkar.

The Tánaiste said the dispute between Mr Trump and other G7 leaders in the aftermath of the weekend summit in Quebec was “very concerning for a lot of people.”

“The very public display of disagreement, I think, sends a very unfortunate signal to many parts of the world that desperately need stability from those countries and unity of purpose,” he said.