Taoiseach sought meeting with former president despite concerns of officials 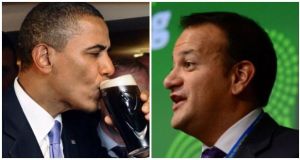 Taoiseach Leo Varadkar is understood to have been keen to meet former US president Barack Obama. File photograph: The Irish Times

The meeting, which was requested by Irish officials, took place during the same trip that the Taoiseach met US president Donald Trump at the White House on his annual visit to Washington.

Mr Varadkar is said to have been advised against the meeting by Government officials, who were concerned it might ruffle feathers when he was in Washington to meet Mr Trump, a strong critic of his White House predecessor.

The Taoiseach is understood to have been keen to meet the former president.

A Government spokesman confirmed that Mr Varadkar had a private meeting with Mr Obama. He said the meeting was to discuss the work of the former president’s foundation in Europe “and in particular its role in fostering leadership”.

“The Taoiseach had a range of formal and informal meetings with members of the current and previous administration during his trip to Washington,” said the spokesman.

They included a meeting with Mr Obama’s vice-president Joe Biden who attended a St Patrick’s Day reception at the Irish ambassador’s residence. The meeting took place more than a month before Mr Biden entered the 2020 presidential race, becoming the leading Democratic contender in the polls to challenge Mr Trump’s re-election.

It is unusual and understood to be at odds with traditional diplomatic protocol for the leader of a country to meet a former head of another while on a visit to that country to meet its current leader.

Mr Obama, who left office in early 2017, regularly meets foreign heads of government as a former US president but usually in their home countries rather than while they are in Washington to meet Mr Trump.

Mr Varadkar is due to meet Mr Trump on his first visit to Ireland as US president when he lands at Shannon Airport on Wednesday afternoon. Mr Trump has hosted the Taoiseach twice in Washington since he took office.

The US president is staying at his Doonbeg golf resort on Wednesday and Thursday nights and is due to fly out of Shannon on Thursday for a day trip to France for the 75th anniversary commemorations of D-Day, before he departs Ireland for the US from Shannon again on Friday morning.

Mr Obama met Canadian prime minister Justin Trudeau informally in Ottawa on Friday while the former president was in the city to deliver a speech.