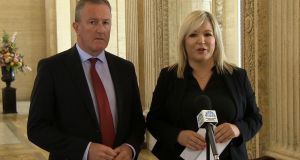 Robin Swann, leader of the Ulster Unionist Party, and Michelle O’Neill, vice president of Sinn Féin. Uncertainty at Westminster and over Brexit form the backdrop to the latest effort to negotiate a deal between the main Stormont parties. Photograph: Michael McHugh/PA Wire

Sinn Féin has expressed disappointment the beginning of a proposed “intensive” stage of the talks to restore the Northern Ireland Assembly amounted to a 25 minute meeting.

The talks took place in Belfast between the five main political parties and the British and Irish governments. The pace of the talks is expected to be stepped up later this week. Tánaiste Simon Coveney has previously said a deal should be done by the end of June, before the start of the marching season.

It is understood five working groups have prepared papers which will be fed into the talks at leadership level later this week.

Speaking afte the talks, DUP leader Arlene Foster said it was “up for finding a way forward as quickly as possible...but of course it must be a balanced way forward and one that everyone in society can buy into.”

Sinn Féin deputy leader Michelle O’Neill said there needs to be “meaningful and intensive engagement” in the latest phase of talks to secure an Executive and Assembly that delivers for everyone.

It was time to move beyond constructive engagement to “actually delivering”, she said. “We have an opportunity here and we should take it.”

“What we need to see now is a meaningful and intensive engagement that actually delivers an Executive and Assembly for everyone.”

SDLP leader Colum Eastwood said “all parties must move into problem solving mode” and that it was “high time” radical changes were made to restore powersharing.

He said his party had already made constructive proposals such as suspending the Petition of Concern to ensure that difficult issues can be legislated for by the Assembly free from any veto.

“We have been clear throughout this process that we must deliver a radical Programme for government that meets the needs of all our people, that is our priority and one in which the people of Northern Ireland deserve,” he said.

Ulster Unionist Party leader Robin Swann said the talks process must address reform of the Petition of Concern and transparency and governance issues if progress is to be made.

Mr Swann said it was “time to get down to the nitty gritty of this talks process”.

His party wants to see “real progress on transparency and governance issues and how the Executive makes decisions, not least in terms of the accountability of Ministers and Special Advisers”.

Alliance Party deputy leader Stephen Farry said there was “a precious window over the next few weeks to get things done.

“There are no guarantees but the only way we can achieve a positive outcome is if people are prepared to work intensively towards attaining it, while showing a sufficient degree of creativity and willingness to compromise for the wider good,” he said. “Alliance remains available to work intensely at this over the coming days and weeks.”