Varadkar and Tusk agree plans for no-deal Brexit should intensify 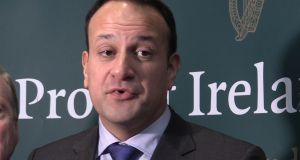 Taoiseach Leo Varadkar in Dublin on Monday. A statement from Government Buildings said both he and European Council president Donald Tusk agreed the Brexit withdrawal agreement “could not be renegotiated”. Photograph: PA Wire

Mr Varadkar and Mr Tusk spoke by phone after the British prime minster, Theresa May, announced she was postponing the vote, due to take place on Tuesday, on the Brexit withdrawal agreement.

Mrs May has cited difficulties with the backstop, the insurance policy to avoid a hard border if the EU and UK cannot agree a future trade deal.

A statement from Government Buildings said both Mr Varadkar and Mr Tusk agreed that the “withdrawal agreement is the best option and could not be renegotiated”.

“They also agreed that preparations for a ‘no-deal’ outcome should intensify.”

Speaking yesterday, Mr Varadkar said while he was open to further clarifications on what the withdrawal agreement says, any such clarifications cannot change its substance.

The Taoiseach also said the EU had already offered Britain a number of concessions, and added that the shape of the Brexit deal was due to the red lines laid down by Mrs May.

“A lot of concessions have been made along the way – most recently, for example, we agreed there would be a review clause. I don’t think we should ever forget how we got to this point.

“The United Kingdom decided to leave the European Union and the UK government decided to take lots of options off the table, whether it was staying in the single market or the customs union or a Northern Ireland-specific backstop, so the reason we ended up with the solution that we have is because of the red lines the United Kingdom itself laid down.”

Senior Government figures warned against any additions to the current deal that would amount to a legal guarantee putting conditions around the backstop, adding that only a clause to unilaterally withdraw from its provisions would satisfy Westminster.

A legal guarantee would be difficult to implement without undermining the backstop, it is argued.

“You can’t do that and preserve the essential quality of the backstop,” a well placed source said. “I don’t see an easy way out.”

However, some in Dublin believe Mrs May knows she cannot secure substantial changes but wants to confront the House of Commons with the consequences of alternatives to her deal.

One figure said that while there was no “good Brexit”, Mrs May’s deal at least presented a manageable Brexit, while adding that the prospect of a no-deal scenario had receded in recent weeks.

Sources said that, on the phone call with Mr Varadkar on Sunday evening, Mrs May outlined the difficult situation she was in, and the fear of many MPs that the provisions of the backstop could apply indefinitely.

It is understood Mrs May raised the prospect of further discussions at an EU level and whether Mr Varadkar would be open to such a prospect. Mr Varadkar, it is also understood, indicated that would be a possibility but outlined that the withdrawal agreement cannot be reopened.