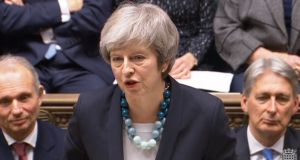 If Theresa May then fails to get the deal through her parliament, then the prospect of a general election will increase. But with both major parties as incoherent and divided as the other on Brexit, that in itself would not resolve much. Photograph: PARBUL/PA Wire

It seems oddly fitting, given the British government’s shambolic approach to Brexit over the past two years, that just as the Westminster parliament was about to have its say on the outcome of the withdrawal negotiations, the process has once again gone into a chaotic tailspin.

In postponing the vote on the withdrawal agreement, which was due to take place on Tuesday, Theresa May opted for the lesser of two humiliations: to avert what she knew would be an overwhelming defeat at the hands of MPs, she was willing to suffer the ignominy of being seen to run away from the inevitable.

The move would make more sense if May had a fallback plan, but everything we know about London’s strategic ineptitude on Brexit tells us that’s a forlorn hope.

Instead, May appears to be seeking a last-minute clarification from the EU side, which she might then present to wavering MPs as a concession to persuade them to row in behind her deal. It’s clear that May cannot obtain any substantive change to the legal text on the backstop – the guarantee that there will be no hard border in Ireland, irrespective of the future trade deal between the EU and the UK.

In particular, any attempt to give London the power to unilaterally renounce the backstop – the key demand of hardline Brexiteers – is certain to be opposed. And rightly so; a backstop that one side can ditch at any moment is not a backstop at all.

The idea that May can go to Brussels and demand such – repeated again on Monday by the DUP’s Nigel Dodds and others – betrays a total inability to grasp the dynamics of the negotiating process. However, that’s not to say that EU member states, the Government in Dublin included, should not do what they can to help May at her moment of greatest peril. If she were forced out of Downing Street now, the risk of a no-deal withdrawal would likely increase, with potentially catastrophic consequences for Ireland, north and south. If the EU can issue clarifications or assurances that help May plot a route out of her domestic crisis, and do that without diluting the legal text of the withdrawal deal itself, then that should be explored.

If May then fails to get the deal through her parliament, then the prospect of a general election in the UK will increase. But with both major parties as incoherent and divided as the other on Brexit, that in itself would not resolve much.

What is needed is for Labour to do the right thing and join the campaign for a second referendum. Thanks to the recklessness of their politicians, the British people voted on Brexit without knowing what it would mean in practice or what it would cost. Now they know, and it’s not pretty. They should be offered an informed choice.