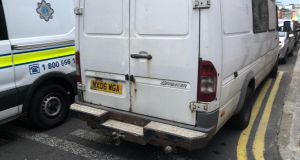 The van appears to have previously belonged to the Greater Manchester Police force. Photograph: Jack Power 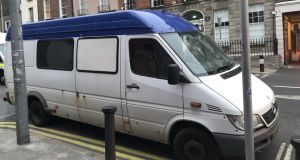 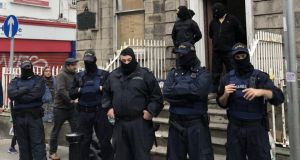 A white van with British registration plates that has not been taxed in the UK for four years was used by masked men to secure a Dublin property on Tuesday night was tax compliant.

However gardai have said they were satisfied that the van was tax compliant. No tax discs were visible on the vehicle on Tuesday night.

A Garda spokesman said officers were “satisfied that the vehicle in question is tax and insurance compliant” in Ireland.

The Department of Justice said the men were from a private firm acting for the owner of the premises to regain possession on foot of a court order.

The van was used by the men who entered the property at 34 North Frederick Street shortly before 7pm on Tuesday.

The masked men who would not identify who they were acting on behalf of when asked, left the scene in the white Mercedes van that did not have a front registration plate.

A Garda spokesman said the he could not comment on why the vehicle did not appear to have a registration plate on the front of the van, while it was parked in front of the property.

A British registration plate on the back of the vehicle indicated the van has not been taxed in the UK since August 2014. Records accessed on a British vehicle registration website record the vehicle as taxed in 2014. There are no further details after that date.

Gardaí from the public order unit, who also wore masks, attended the scene to separate the men who entered the property from a large number of activists from the Take Back The City anti-homelessness group.

Members of the group had been occupying the building but the owner, Patricia Ní Greil, secured a High Court injunction on August 28th requiring them to leave the building, which the occupants defied.

The vehicle, a Mercedes Sprinter, appears to have previously belonged to the Greater Manchester Police force in the UK.