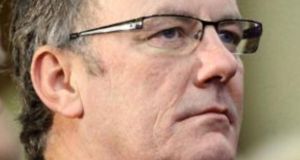 UUP leader Mike Nesbitt: said he hopes to meet Mr Gilmore in the near future to seek elaboration on the comments made by the Tánaiste at the British-Irish Association conference in Cambridge at the weekend

The Ulster Unionist Party leader Mike Nesbitt is to follow up on Tánaiste Eamon Gilmore’s offer that the Government would address unionist perceptions that the State did not do enough to combat the IRA.

Mr Nesbitt said that he hopes to meet Mr Gilmore in the near future to seek elaboration on the comments made by the Tánaiste at the British-Irish Association conference in Cambridge at the weekend.

Mr Nesbitt welcomed Mr Gilmore’s comments which were: “We need to acknowledge those unionists who feel that, notwithstanding the sacrifices made by members of An Garda Síochána and the Irish Army throughout the Troubles, the Irish State could have done more to prevent the IRA’s murderous activities in Border areas.”

Mr Gilmore said that he was not accepting that the perception was correct but was prepared to address the matter, including engaging with the issue through the all-party talks on parades, flags and the past that US diplomat Dr Richard Haass is to begin chairing next week.

The Ulster Unionist leader said he and Newry and Armagh UUP Assembly member Danny Kennedy, who has been campaigning on this issue, planned to meet Mr Gilmore shortly.

“Mr Gilmore’s comments and his choice of audience to make them to are extremely significant given the impending Haass talks on how the past is to be dealt with,” he said yesterday.

“Mr Gilmore’s comments represent a significant development in policy position by the current Coalition Government and IVU will be testing and also pressing him and colleagues in the days and weeks ahead to ensure that the Government of the Irish Republic delivers on the soundbites contained within the Cambridge speech,” he added.

“That will be the real test applied by the innocent victims and survivors of terrorism to the sincerity or otherwise of the Dublin Government’s position,” said Mr Donaldson.

Extradition
He referred to the 1970 Arms Crisis, the manner in which the IRA moved across the Border to carry out gun and bomb attacks and the difficulties in extraditing IRA suspects from the Republic to Northern Ireland.

Mr Donaldson said he expected that the Government would “press ahead with delivering a formal acknowledgement of [the] State’s failures to protect life in Border areas as well as recognising its appalling extradition record which aided and abetted the cause of terrorism”.