Use of public transport up by 7% amid ‘Luas effect’ 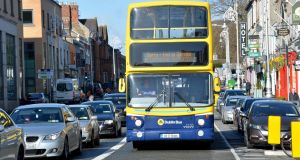 The number of passenger journeys on public transport increased by 7 per cent last year, according to statistics published by the National Transport Authority.

All in, 251 million passenger journeys were recorded between Irish Rail, Dublin Bus, Bus Éireann and the Luas last year, a 16 million rise on the previous year.

The numbers using the Luas saw the biggest increase since 2016, with 37.6 million journeys last year, an increase of 10 per cent.

Bus Éireann was the only public transport operator to record a decrease in numbers, down from 32 million to 31 million journeys. A spokesman for the authority said the dip in passenger journeys over the year was linked to the three-week strike at Bus Éireann that took place in March.

The number of passenger trips on Dublin Bus increased by 11 million, from 125 million to 136 million. Irish Rail also saw passenger numbers rise by 2.7 million, a 6 per cent increase.