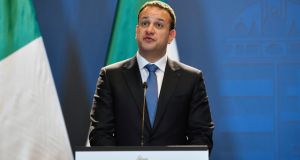 Taoiseach Leo Varadkar: “This is the third year in a row that we’ve had more resources, a bigger budget, more staff, more beds, more home care, and despite all that we haven’t seen an improvement.” Photograph: Tibor Illyes/AP)

As the number of people on hospital trolleys remains stubbornly high, Taoiseach Leo Varadkar has expressed his frustration that higher public health spending is not improving services.

Expressing regret to members of the public affected, Mr Varadkar said: “Numbers are now coming down and we do expect the situation to stabilise in the coming days, and certainly into next week.”

However, the HSE and senior doctors fear the fall will be reversed next week, following a build-up of pressure over the weekend and the return of pupils to school.

Mr Varadkar said the situation was “enormously frustrating. This is the third year in a row that we’ve had more resources, a bigger budget, more staff, more beds, more homecare, and despite all that we haven’t seen an improvement”.

“That is very frustrating for the patients affected most of all, and for the staff and for the Government,” said the Taoiseach, speaking after a meeting in Budapest with his Hungarian counterpart, Viktor Orban.

Patients and healthcare staff: Share your experience of the trolley crisis

Minister for Health Simon Harris yesterday issued a statement in which he appealed “to everyone to listen to the public health messages... in the coming days and help our frontline staff by staying home if you’re ill”.

He apologised to people waiting on trolleys in hospitals and said he wanted to break the cycle of overcrowding.

Yesterday, there were 592 patients on trolleys in emergency departments or on wards waiting for admission to a bed – down from the record 677 recorded by the Irish Nurses and Midwives Organisation on Wednesday.

Amid concerns about the impact of the so-called Aussie flu, the HSE said between seven and 14 people a day are being admitted with the condition to hospitals.

Indicating that individual hospitals will be called to account for their performance, Mr Varadkar said the Government will have to learn “why some places have very few patients on trolleys – in the case of Cavan, zero – and why others have many more”.

“Next week schools, crèches and other childcare facilities will reopen and people will be back to work, and our advice is any child who gets flu-like symptoms should stay at home, rest, drink plenty of fluids and parents use over-the-counter remedies like paracetamol to ease flu symptoms.

“If parents are worried about their child’s breathing or fluid intake or if any young child or infant is in one of the high-risk groups and develops flu-like symptoms, they should contact their GP,” they said.