US use of Shannon Airport makes Ireland a target - Anjem Choudary 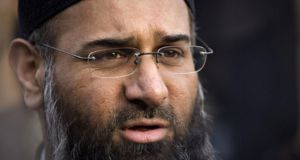 Anjem Choudary said the Charlie Hebdo magazine had “been inciting and provoking and poking and prodding the Muslim community”. Photograph: Tal Cohen/Reuters

Ireland is a legitimate target for attack because of its decision to allow American planes refuel at Shannon Airport on their way to bombing Muslim countries, a radical Muslim preacher based in the UK has warned today.

Anjem Choudary, who has described those behind the 9/11 attacks in the US as ‘magnificent martyrs’, warned that Muslims fighting American foreign policy do not see Ireland as a neutral country because of its willingness to allow American planes refuel at Shannon.

“You allow the Americans, who are the biggest butchers in the world, to stop at Shannon Airport to refuel and go on to kill people in Muslim countries... if you believe the Americans are terrorists, the Irish government is colluding with them and aiding and abetting terrorism,” he said.

“You know it’s not just now that it’s become a legitimate target - I believe for a long time that in the eyes of al-Qaeda and others, it is a place which is being used to aid and abet the war... the Irish claim that it is neutral is not something which has been bought by Muslims around the world .”

Speaking on The Neil Prendeville Show on Cork’s Red FM, Mr Choudary, a lawyer and founder member of the banned British Islamist organisation al-Muhajiroun, said blame for the killings of the Charley Hebdo journalists and cartoonists in Paris lay firmly with the journalists themselves.

“I think there is an action and there is a reaction and in a Sharia court all that would be taken into account,” said Mr Choudary when asked by Mr Prendeville if he condemned the killings of the journalists and two policemen in Paris in Tuesday.

“Why has the magazine been inciting and provoking and poking and prodding the Muslim community and insulting the thing which they hold dearest to them, which is the prophet Mohammed, knowing that full well that in Islam this carries capital punishment?

“We have seen it with the killing of Theo van Gogh, we know it with Salman Rushdie, so there are so many examples and they (the journalists at Charlie Hebdo) knew that this would have consequences - that is why security was upped so much at this particular magazine’s offices in Paris.

“Why, if you like are courting such actions and such reactions - if you know that this carries capital punishment and you know there are Muslims who will kill you if you insult the prophet and you continue to do it blatantly and openly then of course they have blame on their whole shoulders.”

He said there was a serious disparity in concern about the victims of violence as evidenced by the fact that everyone knows the names of those killed in Paris and American hostages such as James Foley and Peter Kassig but the victims of American violence in Iraq and Syria remain anonymous.