US trade delegate to meet industry figures in Dublin

‘Behind-closed-doors’ meetings with Government will explore US agenda 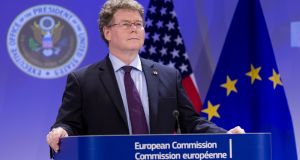 Daniel Mullaney is due to meet officials in the Department of Finance, and also to hold roundtable meetings with large US employers here. File photograph: Thierry Tronnel/Corbis via Getty Images

A senior official in the Trump administration is this week holding behind-closed-doors meetings with Government and industry figures in Dublin about the White House’s trade agenda, The Irish Times has learned.

Daniel Mullaney, who is the US trade representative for Europe and the Middle East, represents the US government’s interest in negotiations with the EU. It is understood that he will meet officials in the Department of Finance, and also hold roundtable meetings with large US employers here.

Sources said Mr Mullaney’s visit is significant due to his role as a senior figure in an administration which has placed unprecedented emphasis on the United States’ trade deficits with the rest of the world. The White House has also displayed an increased willingness to use tariffs to target imports from other countries, including the European Union.

Several trade bodies are set to meet on Thursday with Mr Mullaney, including the pharmaceutical sector and the employers body Ibec. Ireland exported some €39 billion in pharmaceutical goods to the US last year, driven by large manufacturing facilities operated by the sector here which produce goods to service the US market.

Among the items scheduled for discussion, sources said, will be the trade deficit that exists between Ireland and the US. Companies scheduled to meet Mr Mullaney are also likely to raise the potential impact on their operations of tariffs which, they will argue, have limited benefit for the US. Also on the agenda will be broader discussions about methods to deepen trade ties.

The trading relationship between the US and Ireland has been under increased scrutiny since May, when Ireland being placed on the US treasury department’s “monitored list” of countries for the first time.

The list details countries which, in the view of the US, require monitoring in relation to their currency and other trade practices. Some 21 countries were examined as part of a twice-yearly report on foreign exchange practices, with nine, including Ireland, then placed on its monitoring list.

Inclusion on the list drew a swift response from the Irish Government earlier this year. Speaking at the time, Minister for Finance Paschal Donohoe said Ireland ran a large goods trade surplus, but a large services trade deficit, resulting in a broadly balanced position when both goods and services are taken into account.

Mr Donohoe is not expected to meet Mr Mullaney on this trip as he is travelling to the United States himself.