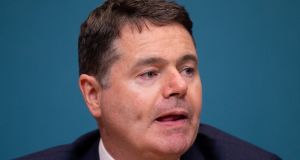 Minister for Public Expenditure Paschal Donohoe said he had instructed his officials to evaluate the proposal to re-establish the review body. Photograph: Tom Honan

The Government should consider re-establishing a special review body to examine pay for top-level executive staff in State organisations, the Public Service Pay Commission has urged.

In its final report, published on Tuesday, the commission said it had been informed by the Department of Public Expenditure that a continuing difficulty was being experienced in attracting candidates for certain high-level posts due to constraints on remuneration.

The commission said the department believed that pay rates were at present being determined on an ad-hoc basis, without a consistent and objective policy support structure, in an effort to attract candidates for certain roles.

“The commission would support the employer’s view that this approach is neither desirable nor sustainable.”

The commission said historically there had been a public policy position that pay for the most senior posts in the public service should be determined in a different manner to the normal industrial relations machinery used for other grades.

The report said the Review Body on Higher Remuneration provided objective, evidence-based assessments to inform pay policy for senior grades between 1969 and 2009.

“The commission would consider it appropriate, should it be decided to conduct a review of remuneration of senior level posts, that the review body be reconstituted for this purpose, given the complexity and variety of the posts under discussion, as well as the range of issues affecting them,”

It said the review body could examine “how pay, pensions and other elements of the remuneration package impact on recruitment and retention, and how to attract the best candidates to apply for top-level posts”.

The report also maintained that “there would appear to be particular recruitment and or retention challenges in certain niche areas – specialist grades in the public service – which may require exceptional intervention”.

The commission also said it noted that management had maintained there were no recruitment or retention difficulties in certain health professional grades examined as part of the report – radiographers, psychologists, paramedics, national emergency operations centre staff and public-service dentists.

It said there “could be issues at local level or in particular specialities” and initiatives under way to address recruitment and retention “should be supported”. “The recruitment process in the public health service could be reformed,” it said.

Minister for Public Expenditure Paschal Donohoe said he had instructed his officials to evaluate the proposal to re-establish the review body.

He said that while the report marked the end of the commission’s mandate, it had recommended that parties to the current public-service agreement consider putting further arrangements in place to allow for pay arrangements more generally to be fully examined. The department was engaging with parties to the agreement “on a possible mechanism that could form part of a future pay agreement”, he said.