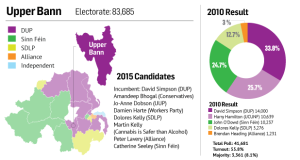 Upper Bann is one of those classic electoral triangles where whoever sells his or her message best will have the best chance of victory.

Dobson, who to have any chance of winning must counter this stratagem, is arguing that Simpson needs to study his arithmetic because this, she says, is a unionist seat and therefore unionists can safely switch their allegiance to her.

Finally, Sinn Féin candidate Catherine Seeley is hoping that the old British strategy of divide and conquer will see the DUP and UUP splitting the unionist vote, and she will slip through in the middle – with the temporary assistance of some SDLP votes.

Simpson, who is carrying a majority of 3,361 votes from the 2010 Westminster election and who has been ensconced here since he took the seat from former Ulster Unionist First Minister David Trimble 10 years ago, has to be favourite to be returned.

Yet, it’s perfectly possible that any of those three scenarios could unfold which must make it perplexing for the voters of Upper Bann which takes in towns such as Lurgan, Portadown and Banbridge.

The message from Simpson is that if unionists don’t rally behind him that Seeley could be elected. He has acknowledged his fairly sizeable majority from 2010 but concentrated on how in the 2011 Assembly elections Sinn Féin polled 29 votes higher than the DUP– 11,528 votes against 11,499 with the UUP in third place with 10,426 votes, and the SDLP much further behind with 4,846 votes.

Little wonder then that Simpson tells unionists that he is not “scaremongering” and that Sinn Féin “could come up the middle and take the seat” with the assistance of SDLP votes. “The figures are there to prove” that he is correct, Simpson insists.

Dobson has been getting a very positive and welcoming response on the doorstep and has a real chance. But to win she must puncture Simpson’s “It’s Sinn Féin or the DUP” argument.

After 10 years as an MP she sniffs that Simpson should be offering something better than such “negative” politics. “David Simpson needs to go back to school and work on the maths because this is a unionist seat. It will be a unionist seat – it depends which unionist.”

Catherine Seeley had to quit her teaching post at the Boys’ Model School in a loyalist area of north Belfast after she suffered sectarian abuse due to her being co-opted for Sinn Féin to the old Craigavon Council. She is now teaching in Lismore Comprehensive School in Craigavon.

This day when she takes a phone call from The Irish Times she is in London with a group of her A-level politics students who have just been visiting Westminster and Downing Street. Did that perhaps persuade her to take a different view on Sinn Féin’s abstentionist policy to the House of Commons?

“No, absolutely not,” she says laughing. “That said there is no harm in learning about the politics of a neighbouring country.”

The teaching issue and her present position as deputy lord mayor of the new Armagh City, Banbridge and Craigavon borough council have given her a high profile here. She is young and personable and has the ability to reach out beyond the republican constituency.

Certainly, to “come up the middle” as Simpson says may happen, she must work her charm on SDLP voters. She thinks she might be getting there: “There is a huge response at the doors particularly from SDLP voters who are saying at this point that they would be willing to lend up their votes in this election.”

Simpson probably deserves to be favourite but equally Dobson or Seeley could cause a big surprise.

SDLP deputy leader, MLA and candidate Dolores Kelly would like those SDLP votes to remain right where they are, and to gain some more, while Peter Lavery will try to build Alliance influence here. Also competing in Upper Bann are Damien Harte of the Workers Party, Martin Kelly of Cannabis is Safer than Alcohol and Amandeep Singh Bhogal of the Conservatives, who by this stage must be heartily tired of Upper Bann Sikh humour, about whether he is a Protestant or Catholic Sikh.