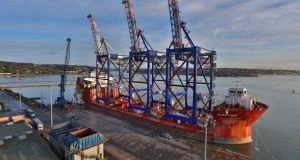 The Port of Cork Company says the full development potential of Cork’s docklands will not be realised until its port related industries and its container terminal are relocated to Ringaskiddy.

The €220 million upgrading of the existing Cork to Ringaskiddy road to a motorway is essential to the success of the port of Cork, an oral hearing into the planned motorway has heard.

Henry Kingston, senior engineer with the port told the An Bord Pleanála hearing that upgrading of 12.5km of the existing N28 to motorway standard would improve access for port-related traffic along the N28 corridor.

The full development potential of Cork’s docklands would not be realised until its port related industries at the city docks and its container terminal at Tivoli in the upper harbour were relocated to Ringaskiddy, he added.

Delays and deterrents to the relocation of port-related industries from Cork’s upper harbour would result in increased traffic between existing locations such as Little Island, Tivoli and the City Docks to and from Ringaskiddy and would limit the development potential at Cork city docks and Tivoli, he continued.

Mr Kingston said the port of Cork welcomed the continued growth of strategic employment industries at Ringaskiddy and noted that GE Healthcare, Janssen and BioMarin have all recently been granted planning permission for expansions to their facilities at Ringaskiddy.

“The Port of Cork Company is concerned that the impact of the increased employment traffic, in the absence of the M28 (the motorway), may add to the operational constraints of import and export related traffic at the port,” said Mr Kingston.

“This has the potential to result in higher transportation costs for Irish goods to market and raw materials from source which would undermine the new competitiveness of the Irish economy and in particular the Cork region,” he said.

Cork City deputy CEO Pat Ledwidge told the hearing that Cork City Council supported the upgrade of the N28 to motorway standard as it would allow the transfer of port activity which is critical to the opening up of brownfield sites in the docklands for development.

Mr Ledwidge pointed out that the National Planning Framework had identified 50 per cent of all future population growth being concentrated in five cities including Cork and that half of all new houses in Cork should be delivered within existing urban settlements.

The framework had set out a target of 115,000 in population growth for Cork and in the context of half of new housing being built within existing urban settlements, both the city docks and Tivoli and improved access to Ringaskiddy were key growth enablers for Cork, he said.