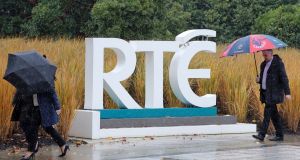 Unions representing staff at RTÉ are to meet management at the broadcaster on Monday to seek more details of its planned cost-saving measures.

Last week, RTÉ management told staff that 200 of the 1,800 jobs at the broadcaster would need to go by the end of 2020 as part of a financial restructuring to save €60 million.

It also said there would be a 15 per cent pay reduction for the broadcaster’s highest-earning presenters, the top 10 of whom earned €3 million between them in 2016.

Unions are opposed to pay cuts for staff and the introduction of any form of compulsory redundancies. They have not ruled out industrial action.

Management said last week an indefinite pay freeze will be introduced for all staff apart from senior management, who will take a 10 per cent pay cut. Staff benefits will be reviewed and work practices reformed.

Union sources said management will be asked on Monday to set out precisely what is being sought as part of the proposed “work-practice changes”.

Unions have argued strongly in recent days that an existing agreement on flexibility and work-practice reforms has not been implemented fully by RTÉ management.

Sources strongly criticised what they described as different messages being issued by management and the board of RTÉ in relation to cost savings.

Meanwhile, the chair of the independent body which oversees the State broadcaster has warned it will not survive without a Government rescue plan.

Moya Doherty, chair of the RTÉ board, said the pace of change in media globally was “quite frightening” and cautioned the broadcaster would struggle to adapt without a hike in the licence fee and continued cutbacks.

“This is a crisis of enormous magnitude,” Ms Doherty said. “The cataclysmic change in the industry globally is quite frightening. Right across the media people are losing jobs.

“It is painful, it is incredibly difficult but we cannot not change. You stand still and you are history,” she told RTÉ’s Marian Finucane in an interview on Saturday. Ms Doherty said the RTÉ board “cannot continue to sanction the deficit that currently exists” in the broadcaster.

Pointing to the UK’s “Small Screen: Big Debate” initiative about the future of public service broadcasting on TV and online, she said she wanted to “urge leaders in Government to be visionary and start that debate” in Ireland. David Puttnam, the film producer who lives in west Cork, should be hired by the Government to run a similar initiative here, she said.

Last year, the Broadcasting Authority of Ireland completed a five-year funding review and recommended an immediate €30 million increase in funding for the national broadcaster plus €6 million for TG4.