Remembered at last: The three Irish brothers who were killed in WW2 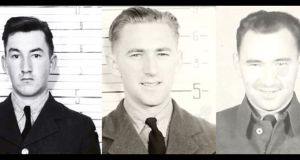 Three Irish brothers who died while serving in the Canadian air force during the second World War have been remembered at a memorial service in Belgium.

Brothers Edward, Harry and Frank Sheehan, who were all born in Ireland, were killed in separate bombing missions during the war.

The service, organised by the Irish in Europe group, was held on Sunday at the grave of Edward Sheehan in Heverlee War Cemetery in Leuven.

Irish and Canadian flags were laid at his grave along with a maple leaf, the symbol of Canada, by Brigadier General Gerard Buckley on behalf of the Irish Defence Forces and by Alderman Dirk Vansina, the deputy mayor of Leuven. The town has had an Irish college for centuries.

The brothers were the sons of James and Mary Ellen Sheehan from Fermoy, Co Cork who had a bakery in the town.

The family emigrated to Canada in 1925 following the tumults of the War of Independence and Civil War. They settled in Vancouver in 1926.

All three brothers joined the Royal Canadian Air Force (RCAF) at the start of the war.

The first to die was the youngest Harry (24) who was killed when his Lancaster plane was shot down over the Netherlands on May 12th, 1943.

Five months later Frank (26) died when his Lancaster bomber was shot down in Germany. The last to die was Edward (29) who was killed in April 1944 when his Halifax LV783 bomber crashed in Belgium. He left behind a widow and a child he never saw.

Event organiser Denis Buckley said he first came across the story following research by Irish historian Damien Shiels who has written extensively about the Irish who fought in both world wars and in the American Civil War.

Mr Shiels reckons that the Sheehan family may be the only southern Irish family to have lost three sons in the second World War. The Sheehan’s family loss would have been compounded by the fact that Mary Ellen Sheehan died during the war too, albeit before her three sons were killed in action.

Their losses were not, however, the worst among the Irish diaspora. In 1942 the five Irish-American Sullivan brothers were killed while serving together on the USS Juneau which was sunk by the Japanese navy in the Guadalcanal campaign. Their deaths and those of another Irish-American family, the Nilands, partially inspired the story that led to the film Saving Private Ryan.

Speaking at the service on Saturday, event organiser Denis Buckley said the Sheehans were typical of Irish diaspora families who served the countries that became their adopted homes.

They were part of the 12,000 Irishmen who died fighting fascism in the second World War in various armed forces, Mr Sullivan added and it was apt that they should be remembered.