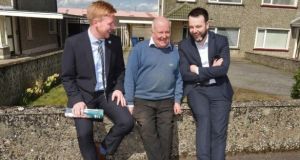 Mr Eastwood made the announcement on Tuesday after South Belfast MLA and former Brexit spokesperson Claire Hanna resigned the SDLP party whip in protest over the decision to form a partnership with Fianna Fáil.

Mr McCrossan, a 30-year-old law graduate from Liverpool John Moores University, has been Assembly member for West Tyrone since January 2016 when he was co-opted to Stormont to replace Joe Byrne who stood down for health reasons.

Mr Eastwood said that Mr McCrossan was acutely aware of the challenges posed by Brexit as exit day on March 29th drew ever closer.

“The SDLP have been consistently clear that any deal must include a backstop to ensure the rights of people here are protected,” he repeated.

Mr McCrossan said he looked forward to “articulating the needs and wishes of the majority of voters” in Northern Ireland who voted to remain in the European Union.