Locals from Dublin 8 protest at the site of number 18, O'Donovan Road - where one half of a semi-detached building has been demolished. Video: Ronan McGreevy 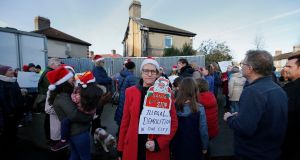 Una Gildea at a protest over an unauthorised demolition that has left her Dublin 8 house exposed. Photograph: Nick Bradshaw

Dozens of people gathered for a protest in Dublin on Saturday in solidarity with a woman whose semi-detached home has been left exposed after a builder demolished the house next door.

Una Gildea thought that when the builders moved in to 18 O’Donovan Road, Dublin 8, that they would just demolish a small one-storey extension, as set out in planning permission.

Instead, they proceeded to knock down the whole house, leaving her home resembling a broken front tooth. “This has fallen on top of me out of nowhere,” she said. “There is no Government body to help me.”

Brian Morrow, a quantity surveyor, was granted planning permission by Dublin City Council to demolish an existing single-storey extension at the back of the house and erect a new two-storey extension in its place.

He won the permission on appeal to An Bord Pleanála in January subject to certain conditions in relation to the size and height of the extension. At no stage did he receive planning permission to demolish the whole house.

Dublin City Council said it has served two enforcement notices on Mr Morrow to restore the front elevation of the house and to complete the works for which he was originally given planning permission.

In a statement, the council added that it had referred the matter to its solicitors to initiate legal proceedings, as the restoration of the facade was not completed by a November 26th deadline.

Mr Morrow now has until January 28th to restore the whole house, and building works are being completed at present.

Ms Gildea said the demolition work began in September. She became increasingly alarmed as the work went far further than she expected and started to damage the walls of her own home.

“I stupidly expected Dublin City Council to step in and prevent it from happening. I really thought they would not let the house be pulled down,” she said.

“If I knew then what I know now I would have drawn attention to this sooner.

“The whole house shook and I immediately knew something was wrong. They just knocked the building without telling anyone. And it was still attached to my property. It’s a semi-detached house, so our party wall has been exposed since September . . . exposed for winter.”

Ms Gildea is an artist and two of her siblings, Kevin and Anne Gildea, are comedians. The family did their best to find some levity in the situation by holding a protest and a festive carol service outside the demolished house on Saturday.

Even Santa Claus turned up, lamenting the fact that he could not go down the chimney of 18 O’Donovan Road because it had been demolished along with the rest of the house.

Neighbours brought boxes of sweets and biscuits to hand out to those who turned up, and a few dogs even showed up in Christmas outfits.

Ms Gildea said the last three months had been “horrendous” but the support of local people had kept her going.

“It shows that this is a real community and a real community spirit here. I’m hoping that it will send a strong message to builders who come into communities thinking they can do things like this,” she said.

Ms Gildea laid a symbolic wreath at the entrance to the building site and thanked those who turned up.

Mr Morrow issued a statement to The Irish Times saying that he was in the process of complying with a Dublin City Council enforcement order and those works should be completed in a number of weeks.

He said that he demolished the whole house “due to structural and safety concerns associated with retaining the front elevation while constructing the associated alterations as per the planning grant”.

French vessel, believed to have been fishing in Irish waters, detained by Naval Service 19:48
Court asked to appoint examiner to St Mary’s nursing home to see if it can be saved 19:30
Government ‘hypocritical’ by failing to act on CMO recommendation to deal with sick pay 19:24
Coronavirus: Large Co Tyrone school closes after cases confirmed 19:15
Covid-19: Next 10 days 'critical', NPHET says, as 234 more cases and two further deaths announced 18:09