UK thought likely to follow Brussels on changing of clock

If Britain did not abolish daylight saving time with EU, Ireland could have two time zones 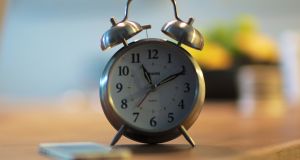 In 2011, the British government proposed a three-year trial of moving to Central European Time, but it was abandoned after opposition from northern England and Scotland. Photograph: Nick Bilton/The New York Times

Britain will likely abolish daylight saving time in line with a push by the European Commission to end the century-old practice of changing the clocks twice a year, internal government emails suggest.

Emails, released under Freedom of Information, show the move sparked official concerns over the possibility of two different time zones on the island of Ireland for much of the year, as Britain prepares to leave the EU.

However, one senior department official in Belfast said his sense was that Britain was poised to follow Brussels’s lead.

“My impression from it coming up in the margins of a conference call with BEIS the other day is that officials’ advice is likely to be in favour of adopting British Summer Time all year,” he said.

But he added, “There could be political difficulties with this emanating from a commission proposal.”

A senior official in London wrote to Belfast advising: “The directive applies from April 1st, 2019, but I think that any decision about whether it will apply to the UK will depend on the ongoing negotiations.

“I’m aware also that this might have relevance to Irish Border issues.”

The Belfast counterpart responds that its impact will be felt across energy, agriculture, transport and road safety “to name just a few” and that other departments will have to be consulted.

“This idea has been about for some time and it will be interesting to see how it plays out, although the results of the commission’s consultation process would seem to be quite persuasive,” he adds.

A consultation has shown eight in 10 EU citizens are in favour of the move.

London officials asked their Belfast counterparts for a memorandum on their concerns for scrutiny by Westminster parliamentary committees by October 9th and advised that Dublin would also be in touch.

Amid a flurry of emails among Northern Ireland departments, one official complains “in the timeframe it will be very difficult to say anything meaningful” about the impact on Northern Ireland, adding:“I am not even sure the executive could agree a position.”

In 2011, the British government proposed a three-year trial of moving to Central European Time, but it was abandoned after opposition from northern England and Scotland.

Northern Ireland would be similarly affected to the north of Britain, notes another official, who points out significant differences in sunrise and sunset times between London and Derry.

“But the latter would arguably provide more opportunity for outdoor activities after the working and especially the school day, and (importantly for tourism) at weekends all year round.

“It will be interesting to see how this plays out in the context of Brexit.

“It could potentially create a need to put clocks back when crossing the Border from south to north as well as all the other issues.”

The Belfast official suggested it might be such “a sensitive topic” that “we can’t say anything in the absence of a Minister”.

Northern Ireland has been without an executive for two years, since power-sharing partners the DUP and Sinn Féin fell out over the DUP’s involvement in a renewable energy scheme scandal.