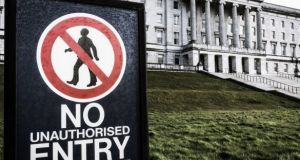 Disputes over the status of Irish in Northern Ireland played a significant part in the collapse of the power-sharing executive in Stormont in 2017.

The United Kingdom should adopt a comprehensive law and strategy on the promotion of Irish in Northern Ireland as a “matter of priority”, a council of European Ministers has found.

The Committee of Experts on the European Charter for Regional or Minority languages (ECRML), which seeks to protect and promote languages used by traditional minorities, issued its fifth report into the UK’s implementation of the charter.

While the committee found “considerable progress” in the protection and promotion of minority languages, it noted that the UK has not upheld its treaty obligations to promote the minority languages of Cornish, Irish and Ulster Scots.

The report hightlights that the Northern Ireland Assembly has so far not reached a consensus on the adoption of an Irish Language Act. Disputes over the status of Irish in Northern Ireland played a significant part in the collapse of the power-sharing executive in Stormont in 2017.

“The committee of experts considers the adoption of such legislation as essential to free the promotion of Irish from political tensions,” the report states.

The committee said the public use and promotion of Irish in Northern Ireland continues to be “highly politicised”.

The report noted that some departments of the Northern Irish authorities as well as some local authorities have adopted “single-language policies”, excluding the use of Irish, which is “incompatible with the charter”.

The Committee of Experts also highlighted that the use of Irish in Northern Irish courts is still illegal under legislation from 1737, which the committee considers to be “discriminatory”.

The report states that the use of place names in Irish by local authorities and public service providers such as Royal Mail is “patchy” and that bilingual signage is usually limited to areas where Irish speakers constitute a large majority of the population.

“This implicit threshold is incompatible with the charter,” the report states.

“As part of their licensing conditions, the United Kingdom authorities should require that commercial stations broadcast Irish programmes on a regular basis,” it recommends.

Meanwhile, the report also notes that responsibility for the Cornish language is not yet devolved, which hampers the ability of local authorities to promote this language.

The Council of Europe also said that more work needed to be done to promote Ulster Scots in the education system and in the media,

Based on the expert report, the Committee of Ministers has recommended that – as a priority – the UK authorities adopt a comprehensive law and strategy on the promotion of Irish in Northern Ireland, continue to strengthen Scottish Gaelic education and devolve the necessary responsibilities to Cornwall county council to enable it to effectively promote Cornish.

The UK is expected to provide information on the implementation of these main recommendations in the course of 2020, the report adds.