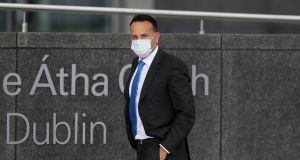 Tánaiste Leo Varadkar: suggested a civil offence could be committed by someone breaking rules on numbers attending gatherings in their homes. Photograph: Brian Lawless/PA Wire

The Government “deliberately obfuscated the line” between Covid-19 guidelines and legal requirements to maximise compliance, an Oireachtas committee will be told on Wednesday.

The Special Committee on Covid-19 Response will hear criticism of how the Government handled communications around the pandemic from a range of academics, civil society groups, and representatives of the legal profession.

The Law Society, the representative association for solicitors, will say there is a need for clearer communications on restrictions.

It will say “confusion and resentment arose due to the lack of clarity as to what the rules were, whether they were legally binding or merely guidance, how they applied in different situations, and whether they were consistently enforced”.

The group will also say communications around restrictions “fell short” of providing certainty with occasions when “the extent and application of those restrictions was unclear to An Garda Síochána and to the legal profession, let alone the general public”.

The Irish Council for Civil Liberties will say many regulations were not published in advance of coming into force, and were difficult to find even after being signed by a Minister.

“We consider that at times the Government deliberately obfuscated the line between what was a legal requirement and what was a guideline in order to ensure the widest compliance with the guidelines. [We consider] this approach to be unacceptable.”

Trinity College Dublin constitutional law expert David Kenny will tell the committee that failure to properly communicate the content of regulations is “a major issue” and that there has been “repeated elision, in State communications, of legal requirements and public health advice”.

He will cite advice on cocooning and the requirement to self-isolate after travel as consistently being presented as a legal obligation, and suggest that “it might be thought in some quarters that this is a useful strategy for ensuring compliance with public health advice”.

“But such a strategy raises serious rule-of-law concerns, and has real costs. It confuses members of the public; erodes public trust in communication about the law; and is an abuse of State power, implying a legal threat that does not exist.”

The Free Legal Advice Centres will also criticise the process, saying it has not always been possible to get access to legally binding measures before they come in to force, making it harder to “carry out appropriate scrutiny”. It will also say it has been unclear which measures are legally binding or are merely advice or guidance, leading to “significant uncertainty for ordinary citizens”.

The Irish Council for Civil Liberties will also say there is “significant room for improvement on the transparency of decision-making and communication with the public”, including how the National Public Health Emergency Team operates. It will call for at least some of that team’s meetings to be held in public.

The Law Society will tell the committee that while a recent challenge to the constitutionality of Covid provisions fell flat, “the laws enacted and regulations adopted to deal with the pandemic are not immune from constitutional challenge”.

It will also call for clarity on what is meant by a “civil offence”, which Tánaiste Leo Varadkar suggested could be committed by someone breaking rules on numbers attending gatherings in their homes.

“[This] is of concern as criminal and civil law should not be conflated in any way. As such, clarity on this issue would be welcome.”

The Law Society will also say it has “some concern” over the proposal to empower gardaí to enter private dwellings to enforce Covid-19 regulations.