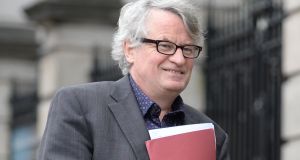 The UK government is under pressure to clarify immigration rules that human rights activists say undermine the rights of Northern Ireland-born Irish citizens under the Belfast Agreement.

He was referring to the changes to immigration rules published on March 7th but highlighted this week by citizens’ rights campaigner Emma DeSouza, a Northern Ireland-born Irish citizen embroiled in a lengthy appeals process after her US-born husband’s application for residence was rejected.

The UK changed the definition of a European Economic Area national in the rules last month stipulating that dual British nationals who are British by birth will not be considered an EEA national in the UK.

Ms DeSouza said the change reaffirmed “a worrying trend” of Northern Ireland-born Irish citizens are going to be “among the only EU citizens within the UK unable to access their EU rights and entitlements”.

She argues that this is significant because the UK government has taken the position that all people of Northern Ireland are British by birth under the British Nationality Act 1981, a presupposition that, she says, “goes against the Good Friday Friday Agreement right to be Irish or British or both as you so choose”.

The Co Derry woman says that Irish citizens or dual Irish-British citizens in Northern Ireland cannot apply for “settled status” as EU nationals in the UK after Brexit. If they could, this would, under the UK’s proposed divorce deal, provide them with “a legal security blanket” to protect their rights.

“So what is happening is the government is imposing blanket British citizenship on the people of Northern Ireland and removing our access to EU rights through this process,” she said.

The Department of Foreign Affairs said the Government was continuing to engage with the UK Government “to ensure that the important citizenship and identity provisions of the Good Friday Agreement are upheld in all relevant policy areas and in all scenarios.”

Ms DeSouza’s husband applied to live in Northern Ireland in 2015 as the family member of an EEA national living in the UK.

The UK Home Office initially refused the application on the basis that his Co Derry-based wife applied for the visa as an Irish national, which as a dual citizen disqualified her.

Her husband challenged the decision, arguing that his wife had the right to be treated as an Irish citizen under the 1998 agreement and was exercising her freedom-of-movement right as an EU citizen.

The couple won but the Home Office is appealing the decision and a hearing has been delayed until the UK is due to leave the EU. Ms DeSouza fears further changes with Brexit, particularly in light of the trend reflected in the new immigration rules that she noticed in recent days.

Mr Allamby called on the UK government to outline further details of the review British prime minister Theresa May promised on the identity rights of citizens when she visited Belfast in February.

“We would call on the government to issue the terms of reference and a timetable for the review as quickly as possible in order to resolve questions of family reunion in Emma DeSouza and other cases,” he said.

Brian Gormally, director of Northern Irish human rights group Committee on the Administration of Justice, said that Brexit has opened up “a legal reality” that the UK has not legislated to protect the rights of Northern Irish citizens under the Belfast Agreement.

“Brexit has peeled away some things that have been hiding contradictions in British law relating to the Good Friday Agreement,” he said.

Daniel McCrossan MLA, the SDLP’s Brexit spokesman, called on the UK government to address the immigration rules and “commit to conforming with the spirit and letter of the Good Friday Agreement”.

“These rules, which redefine EEA citizenship as contradictory to British citizenship, and further define those born in the North as automatically British, fly in the face of the guarantee that all those born here can identify as Irish, British or both,” he said.