UCC criticised for naming building in honour of Nobel laureate 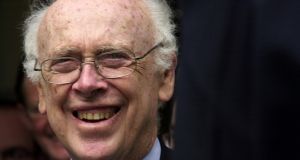 University College Cork has been criticised over a decision to name one of its buildings in honour of Nobel laureate James Watson, who has expressed controversial views on race. Photograph: Eric Luke/The Irish Times.

University College Cork  has been criticised over a decision to name one of its buildings in honour of Nobel laureate James Watson, who has previously expressed controversial views on race.

Dr Watson visited UCC on Wednesday for a ceremony to name a building in the Brookfield Health Sciences complex after him. He won the Nobel Prize in Medicine in 1962 along with Francis Crick and Maurice Wilkins for their discoveries regarding the molecular structure of nucleic acids.

Former Green Party TD and UCC post-graduate Dan Boyle criticised the move, saying that Dr Watson was a controversial figure whose comments on African people had provoked condemnation. He said UCC should not be seen to be endorsing those views.

Mr Boyle said Dr Watson had told The Times in 2007 that he was “inherently gloomy about the prospect of Africa (because) all our social policies are based on the fact that their intelligence is the same as ours - whereas all the testing says not really”.

He said Dr Watson, a Chicago native who claims Scottish and Irish ancestry, then went on to say that despite the desire that all human beings should be equal, “people who have to deal with black employees find this is not true”.

Mr Boyle told The Irish Times he could see no good reason why UCC, which awarded Dr Watson an honorary doctorate in 2010, was honouring him again.

“I have no problem with acknowledging Dr Watson’s scientific achievement or with him lecturing people about what he knows but I do have a problem with naming a building in his honour because then you are honouring more than their work, you are recognising them as people,” he said.

“And he has big question marks over his character because of what he has said about African people where he seems to ignore social factors and educational opportunities and fails to recognise that they have anything to do with what he perceives as a general lack of intelligence.”

Mr Boyle said Dr Watson’s fellow Nobel laureates - Dr Crick or Dr Franklin - whose work paved the way for Dr Watson’s research - would have been more suitable candidates to name a building after.

“We in UCC should set different standards for our own honours, and we have the freedom and indeed the responsibility to decide the point at which racial prejudice overshadows scientific prowess,” said Mr Coffey.

UCC defended its decision, describing Dr Watson as “a scientist of world renown who is responsible for one of the most profound discoveries of the 20th century” and adding that the university was pleased to acknowledge his scientific prowess.

“In naming this facility after Dr Watson we are building on his contribution to science and recognising his strong association with UCC as an honorary doctorate alumnus and scientific advisor to many UCC researchers,” the university said.

“The decision to name the building was made within the recognised university processes and the President informed Governing Body of this decision,” it said in a statement which noted that Dr Watson’s grandmother came from Co Tipperary and he was proud of his Irish ancestry.