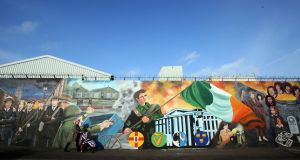 A woman with a pushchair walks past murals on Falls Road in 2017. Photograph: Paul Faith/AFP/Getty

Try asking a few random people in the Republic the way to the mural of the Corr family. Every one of them will wonder why a bunch of singing siblings from Dundalk would have their own mural.

In Belfast, you will be directed to the huge mural on the Ormeau Road, unveiled last July to “commemorate the significant and courageous part played by the Corr family, from Belfast’s Ormeau Road, in the seminal events around 1916 . . . ”

In several ways, the mural featuring the celebrated Cumann na mBan sisters, Elizabeth and Nell Corr, and their three brothers, Henry, George and Charles, who played a part in the 1916 Rising and the first World War, is a nod to Belfast’s historical shifts.

That it was sponsored by the Housing Executive and the Lower Ormeau Residents Action Group and carries the Irish-language title, Clann Uí Chorra: An Stair ina Beo, tells us that Irish history and language are celebrated in a prominent place just a few hundred yards from City Hall, for so long the symbol of unionist domination.

“As a nationalist, you would have gone there to pay your gas bill, but it was an alien edifice,” says Dr Eamon Phoenix, the political historian and commentator.

In these times, City Hall and Donegall Square are seen as a neutral space.

On the other hand, the mural marks a stark dividing line, one of several “invisible barriers” in the space of about a mile and a half, markers that double as an advisory to strangers that they are crossing into a different tradition. The advisory is gentle, but the fact that it is there at all “speaks to a reality that, like a lot of things, is politely left to one side”, in the words of one worried northerner. They feel safe and peaceful now.

But this is the area that encapsulates the story of Belfast, says Dr Phoenix, who has written the history of northern nationalism and the extraordinary greening of Belfast.

Those old enough to remember when news bulletins invariably began with atrocities in the North will find echoes in the street names here. They saw major loss of life.

The deep-dyed loyalist Donegall Pass marked the violent interface between the nationalist, republican Market area and Lower Ormeau. The still-standing Rose and Crown bar was the scene of the 1974 outrage when a canister bomb was thrown inside, killing six. The plaque on the wall outside the Sean Graham betting shop commemorates the five who were killed in a hail of gunfire in 1992.

The word “collusion” still hovers, lending some of these atrocities extra potency.

While peace reigns – and no one seriously believes it is imminently threatened – some are anxious to remind authorities here and in London that it is still a “process”, which they fear is being treated too casually.

Steven McCaffery, editor of the the Detail, whose website created the maps for this series, is one of those.

“As we discuss the future, we need to be conscious of the tensions that still exist . . . Echoes of British-Irish history are still to be heard here,” he says.

They are evident in the short walk from the centre up the Ormeau Road, one of the oldest thoroughfares in the city, to the Ormeau Bridge. It encompasses several of those invisible barriers.

Within shouting distance of City Hall is the Market area, one of the oldest Catholic areas in the city, dominated by the fine church of St Malachy, still Catholic, nationalist and republican. Hardly a stone’s throw from there is the enormous union flag mural that marks the Donegall Pass,

Not far up the road, in the heart of the lower Ormeau, where the Corr family mural marks the territorial shift, the Irish language suddenly makes an appearance.

Here is Lárionad an Droichid, An Droichead’s culture centre, a performance space that hosts céilís and plays, flourishing alongside south Belfast’s only Irish-medium bunscoil, the multidenominational Scoil An Droichid. An off-street sign to the Lavinia housing estate reads “Fáilte go Lavinia”.

A little further on, we cross another invisible barrier as we come to the old Ballynafeigh Orange Hall, marking out what was once a solidly Protestant/unionist area, and the Ormeau Bridge, reminiscent of vicious July 12th parade clashes, where flags and murals represented violence and standoffs. Not any more.

This is an area in lively transition, where the GAA club shares the grounds of the rugby club and lots of evidence of other cultures – Asian, African and east European – that are increasingly becoming a feature of Belfast life.

Somewhere in here lies the holy grail of the peace process, where decent people in both communities are working hard to build bridges. When the most recent census offered a new label by which northerners could describe themselves, more than a fifth chose to call themselves Northern Irish and the media seized on this as a pointer to something entirely new, which it labelled the “Rory McIlroy generation”. That was until the reality of the Assembly elections intruded.

“You will see no peace walls on the Ormeau Road, but look carefully,” says Dr Phoenix. “The election result confirmed that not much has changed in 100 years. When the chips are down, ethnicity outweighs economic considerations. I think it has shocked unionism to the core. It shows that despite attempts to achieve consensual politics, the national question has not been laid to rest.”