The bodies of two men, believed to be a father and son, recovered on Sunday afternoon 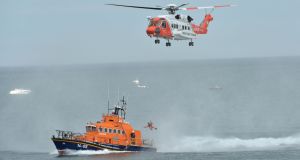 A body has been found off Malin Beg by a search helicopter and taken from the water by an RNLI Bundoran lifeboat. File photograph: Alan Betson/The Irish Times

Two men have died following a boating incident off the coast of Co Donegal.

The bodies of the men, believed to be a father and son, were recovered on Sunday afternoon.

The pair had left the pier at Teelin on Saturday, but had not returned overnight.

The Coast Guard was alerted when a farmer came across one of the bodies on a remote stretch of beach.

The second body was found a short time later off Malin Beg by a search helicopter and taken from the water by an RNLI Bundoran lifeboat, following a large-scale search that also involved the Killybegs Coast Guard and the RNLI Arranmore lifeboat station.

The identities of the two men have not yet been made public.

However, it is understood the men may have been Polish nationals who were living in Ireland.

A rigid-inflatable boat was also found washed up on rocks.