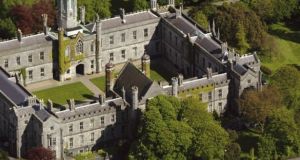 Aerial photo of NUI Galway Quadrangle. The university set a target to become “one of the greenest, smartest, healthiest and community-focused” campuses in the world.

Two third-level institutions in the west have set out to become “green” campuses with a focus on sustainable energy use.

Galway-Mayo Institute of Technology (GMIT) hosted “energy tours” of its Dublin road, Galway campus on Tuesday, as part of an open day aimed at raising awareness about its green flag bid.

GMIT’s Mayo campus in Castlebar was the first institute of technology to secure a green flag, in 2011, and its Letterfrack campus in Connemara secured similar status in 2014.

NUI Galway across the city has set a target to become “one of the greenest, smartest, healthiest and community-focused” campuses in the world.

It has already become the first university in Ireland to join a sustainable energy communities network established by the Sustainable Energy Authority of Ireland (SEAI).

The SEAI network includes a “battle of the buildings” energy efficiency competition, and engagement of the wider community through a dedicated website.

Some 3,000 students and some graduates attended a careers fair at NUI Galway on Tuesday, where 90 companies were recruiting for some 4,500 “potential” jobs.

Some 33 per cent of the posts sought applicants from all disciplines, according to NUI Galway career development centre head Josephine Walsh.

“These are actual jobs, and not internships, and it is a sign of economic recovery,” Ms Walsh said.

Enterprise Ireland and significant local employers in Galway, including Medtronic, SAP and Smyths, participated in the event.

Marion Nolan, a graduate with information technology and French qualifications from Co Sligo who attended the fair, said she had completed a number of internships with multinationals.

“I found it useful, but the companies I talked to referred me to their websites, rather than talking about specific posts,”she said.

Ms Walsh noted that NUI Galway students in first and second year had attended the fair, with an eye to identifying trends in the job market.