Tusla criticism of Scouting Ireland ‘based on incomplete information’ 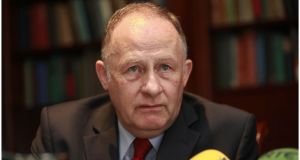 Criticism from the State’s child and family agency over how Scouting Ireland handled several recent cases of youth-on-youth abuse was based on “incomplete” information, the organisation’s interim safeguarding manager Ian Elliott has said.

Tusla had raised concerns with Scouting Ireland over the handling of six cases involving juveniles, which the agency described as “very serious,” at an Oireachtas committee on Wednesday.

But the agency had only reviewed referral reports on the incidents, and had not read the full case files, Mr Elliott told the Oireachtas committee on children and youth affairs.

The youth organisation was recently embroiled in fresh controversy after Tusla raised a series of concerns in a letter sent to Scouting Ireland chief executive Dr John Lawlor on February 18th.

The letter detailed concerns the agency had with current supervision standards in the youth organisation, and criticised the handling of several recent cases of alleged youth-on-youth sexual assault.

Speaking at the committee, Mr Elliott defended standards in the youth organisation, and said he disagreed with Tusla’s assessment of how the cases had been handled.

“What they have read is a referral form, a referral form which they designed, which is limited in terms of what it provides; it is a written record of what occurred,” Mr Elliott said. “The case file is much fuller in terms of its recording, and is also added to by the experience of the individuals involved,” he said.

Tusla service director Linda Creamer said 21 child-protection referrals had been made to the agency regarding Scouting Ireland last year.

The majority of those cases were now closed, and had related to “inappropriate behaviour”. However, six of the cases were open, and were “very, very concerning,” Ms Creamer said.

“These cases are young people late at night, in fields, and they are very serious allegations, so we had an urgency,” she said. On foot of delayed responses from Scouting Ireland, Tusla wrote the controversial letter to Dr Lawlor, which included details of several of the cases.

It was not Tusla’s intention that the critical letter would be made public, the agency’s chief executive Pat Smith told the committee.

The controversy unfolded dramatically in the public eye when Minister for Children Katherine Zappone read the contents of the letter into the Dáil record last month, citing a desire that parents be made aware of the “serious concerns” it raised.

Tusla had not sent the letter to Ms Zappone, but she was made aware of it by Mr Elliott, after which she requested a copy from Tusla.

In an opening statement to the committee, Adrian Tennant, chair of the youth organisation’s board, said: “Scouting Ireland is a safe organisation”.

The youth organisation was “not in conflict with Tusla” over the recent controversy, he said. The organisation has hired a new full-time safeguarding manager, who will take up the position in early April.

Scouting Ireland is due to meet Tusla officials on Thursday, where a six-point action plan to address the agency’s concerns will be discussed.

The action plan, circulated to committee members and seen by The Irish Times, agreed that Scouting Ireland would review their policies around safeguarding and risk assessment, in particular for overnight trips and camps. Scouting Ireland will also review with Tusla and An Garda Síochána the handling of the six recent cases of concern.

Dr Lawlor told the committee the legacy of historic child sexual abuse in former scouting organisations was a “very painful truth” to hear. An internal review of past abuse identified 313 alleged child sex abuse victims, and 237 alleged perpetrators, mainly related to periods between the 1960s and 1990s.

“Those who abused children in their care over those decades betrayed the vast majority of volunteers who served young people so well,” Dr Lawlor said.