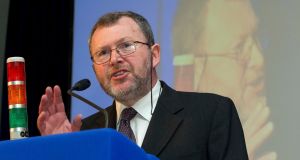 The Government should introduce a 1 per cent levy on corporation profits to generate a dedicated fund to finance higher education, the Teachers’ Union of Ireland (TUI) has urged.

In an address to the union’s annual conference in Cork, its general secretary John MacGabhann said there was a funding crisis in third-level education which needed to be addressed urgently.

He argued that the introduction of a student loan scheme which was favoured in the recent Cassells expert group report represented privatisation in education, rather than investment.

“Adding to personal debt or creating a newly indebted generation by way of income contingent loans is neither financially nor socially appropriate. In any event, the income contingent loan scheme, conceived of a stallion by the Cassells expert group, has the cut of a gelding. It won’t work.

“We believe that third-level education, as part of the social contract, should be funded from Government revenues, that is from taxation – and the TUI has no wish to be coy when it comes to taxation.”

Mr MacGabhann said the country’s tax base was currently too narrow and the tax-take insufficiently large.

He said to have the level and quality of services that the union demanded, “ we must unavoidably and in honesty conclude that additional taxation is required”.

He said the TUI believed a 1 per cent levy should be applied to corporation profits to fund higher education and that in 2016 such a measure would have realised about €550 million.

“Why, we may be asked , should corporate profits be levied in this manner. For the very simple reason that to do so is fair and, indeed, provides those corporations with an opportunity clearly to demonstrate what they claim to have but what is little in evidence, that is a commitment to the society in which they base their enterprise.”

“These corporations benefit hugely from having available to them a very deep pool of graduate talent in this country – supplied courtesy of the Irish taxpayer.”

Mr MacGabhann also reiterated the union’s concern about proposed new legislation to establish technological universities. He said this would involve the merging of existing institutes of technology which he described as a “policy of rationalisation”.

He argued that a number of institutes were already of a scale that was greater than that reached by some institutions when they became universities in the past.

“We hold that it should be open to an individual Institute of Technology, if it meets the criteria set out and has the requisite scale, to apply for designation as a technological university without being yoked by violence to another institute that is an unwilling partner in a forced marriage.”

He said they should insist to management that each and every teaching hour that arose was offered in the first instance to an existing qualified teacher who was working part-time hours.

“Bear in mind that, in teaching terms, any additional hour secured by a member, represents a 4-5 per cent salary increase. That is almost €1,500 per annum per additional hour, That is not insignificant. That is worth fighting for.”