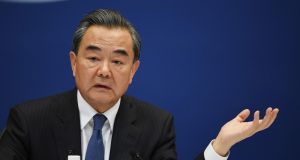 China’s foreign minister Wang Yi has appealed for a diplomatic solution to the nuclear standoff on the Korean peninsula, and again urged all sides to find a peaceful way to resolve tensions.

“We know the situation is tense,” Mr Wang told a briefing in the Chinese capital Beijing. “The more tense things are, the more calm we need to be to find the opportunities and possibilities for dialogue.”

China is emerging as a possible peace-broker in the growing rift between Washington and Pyongyang over North Korea’s nuclear programme, which has seen it stage repeated atomic weapons tests and missile launches in the face of United Nations sanctions.

Although it has been an ally since it helped North Korea in the Korean War (1950-53), and helped prop up its faltering economy for many years, Beijing is becoming exasperated with the North’s nuclear ambitions, which threaten to bring instability to China’s borders.

China wants a return to six-party talks, chaired by it with both Koreas, the US, Russia and Japan, to find a deal. The often tortuous and fruitless talks collapsed in a stalemate in 2009, during the rule of North Korean leader Kim Jong-un’s father, Kim Jong-il.

Washington has also given powerful indications that it would use a military strike if necessary, pointing to recent actions in Syria, where it fired missiles on a government air base, and Afghanistan, where it dropped a huge bomb on an Islamic State target, as evidence of its readiness to intervene.

US vice president Mike Pence visited the demilitarised zone dividing Korea this week on his Asian tour, prompting North Korea’s deputy UN ambassador, Kim In-ryong, to accuse US president Donald Trump of bringing the countries to the brink of thermonuclear war and turning the Korean peninsula into the “world’s biggest hotspot”.

If the US launched a heavy strike, “the Chinese people will not allow their government to remain passive when the armies of the US and South Korea start a war and try to take down the Pyongyang regime”, the Global Times said.

“The Chinese will not let something like that happen, especially on the same land where the Chinese Volunteer Army once fought in the early 1950s,” it said.

At the same time, relations between South Korea and China have hit rock-bottom over the South’s decision to deploy the US Terminal High Altitude Area Defence (Thaad) anti-missile system, ostensibly to defend against increased belligerence from the North.

China believes Thaad can be used strategically against its missiles and has launched a de facto boycott campaign against South Korea, especially against products from Lotte, which sold the golf course land on which Thaad is being built, and also banned tourism packages.

South Korea’s business sentiment index showed that South Korean firms doing business in China felt that business conditions in the neighbouring land were the worst ever, largely due to restrictions, although also due to market competition.