Troops return home from Syria to self-isolate for 14 days 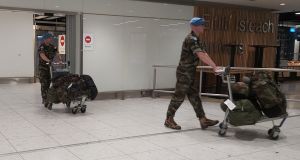 More than 120 member of the Defence Forces have returned from a six month deployment in Syria, landing at Dublin Airport on Saturday evening.

Some 122 members of the 60th Infantry Group of the United Nations Disengagement Observer Force returned at 6:50pm, and must now self isolate for 14 days.

The deployed group included personnel from the Army, Naval Service and Air Corps, mainly drawn from the 6th Infantry Battalion based in Custume Barracks, Athlone.

The returning group flew through Damascus International Airport en route home, which the Defence Forces said was the first rotation through the airport since the start of the Syrian civil war in 2011.

Some concerns had been expressed in recent days that the return of the Defence Forces contingent would be delayed due to the global coronavirus crisis.

The returning group has been replaced in the field by 126 Defence Forces personnel, who have already joined the 61st Infantry Group of the UN observer force, and are to self isolate for 14 days in the camp.