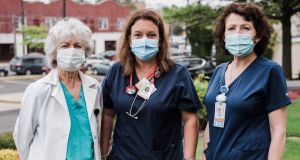 Rockaway in New York is a slender peninsula jutting out to the sea, southwest of JFK airport. More isolated and economically deprived than other parts of Queens, people flock there during summer months to enjoy its beaches.

Year-round, it’s home to about 130,000 people. Their medical needs are almost exclusively met by St John’s Episcopal Hospital in the easterly neighbourhood of Far Rockaway, where three Irish nurses have battled Covid-19 for months.

With 17 nursing homes and other residential services for the elderly within a few blocks of the hospital – the only one on the peninsula – Covid-19 has had a devastating impact on this close-knit community.

Kates has worked at St John’s since 1991. The people of Far Rockaway “are overwhelmingly kind to us – they address me as “Irish,” she said. “There are a lot of good people in the community.”

The first Covid-19 case in St John’s was confirmed on March 6th. Since then, they have dealt with 900. An extra 100 beds were added to the hospital’s usual 257-bed complement. The worst of the surge lasted a fortnight.

So far, New York has had nearly 200,000 cases, with almost 17,000 deaths. By mid-May, Far Rockaway had the second-highest death rate in the city, according to statistics provided by the New York City department of health, with 452 deaths per 100,000 people.

Tents on the pavement

For days, Kates worked “13 hours straight, not stopping to eat”, with just a bottle of water in her pocket to keep her going, while colleagues struggled to deal with patients in tents set up on the pavement.

“There were probably 12 patients on stretchers on the sidewalk, and we were deciding who to intubate and bring in first,” the Athlone-born nurse told The Irish Times.

It was horrendous. I’ve been a nurse for a long time, but I’ve never seen anything like it

On April 11th, Kates knew she had caught the virus when she took a bite of a sandwich and “it tasted like cardboard”. She was off sick for a week with a “wicked” cough.

Carmel Mangan, a nursing supervisor from Limerick City who joined the hospital in 1966, “wouldn’t be doing [nursing] this long if I didn’t love it,” she said.

Still, the pandemic’s peak in Far Rockaway was something akin to “a warzone,” she said. “It was horrendous. I’ve been a nurse for a long time, but I’ve never seen anything like it.”

The frenzy caused by the Covid-19 surge in Rockaway is now being replaced with the kind of stillness that would have been unimaginable just a few weeks ago. The hospital is by no means empty, but the number of Covid inpatient numbers have fallen.

However, fears remain of a potential second wave; Kates worries about it colliding with the regular flu season in the autumn. Mangan said people are going to have to be “very, very careful”.

Once you get people in critical care, it’s much easier to keep them alive

“It’s very hard in New York City,” she said. “The amount of people – and a lot of these people are in apartments. It’s so hard.”

Elizabeth Gallo, an interventional radiology nurse from Castleisland, Co Kerry, has been at St John’s for 24 years. Once the surge hit, Gallo found herself back in the intensive- and critical-care units.

“Once you get people in critical care, it’s much easier to keep them alive,” she said. “They are sedated and intubated, and every day the treatments changed. We kept them alive.”

The three nurses said they were impressed with Ireland’s response to the pandemic, which enforced stricter measures than New York about how far people could travel from their homes.

Mangan, who watches RTÉ on her iPad most evenings, said her home country has done “a really good job” at containing the spread of the virus, noting that it also benefits from having a smaller population.

Both Mangan and Gallo were in Ireland separately at the start of the pandemic. Soon afterwards, Gallo noted that Irish schools and colleges had closed and her family in Cork had gone into lockdown.

“The people of Ireland were told what to do and how bad” the virus was, she said. “We get criticism here in New York, but we did the best we could. There will be criticism down the road about how we handled it, but we’ve never been through anything like this.”

The memories of the darkest days will linger with all three: the calls to families to tell them a loved one was dying, or not having time to shroud immediately the latest dead because another patient urgently needed intubation.

However, the victories have helped to keep hope alive. So far, St John’s has discharged 540 Covid-19 patients. The departure of each one is marked by the ringing of chimes at the hospital’s main door.

“You’re working and you’re working and then you hear that chime, and it just made you feel better,” Kates said. “You’re running and racing, but guess what? Some people are pulling through this.”