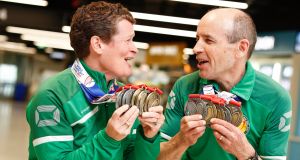 Team Ireland have been welcomed home by friends and family after winning 50 medals at the World Transplant Games.

The 38-member team arrived at Dublin airport with 17 gold medals, 18 silver and 15 bronze, leaving them in 11th place out of the 56 countries that competed in the games. The 320 athletes competing for the hosts, Britain and Northern Ireland, topped the medal table.

The Irish team was comprised of 29 men and nine women ranging in age from 16 to 81. All of the athletes who competed at the games in Newcastle have received transplants at some stage including heart, lung, bone marrow, liver and kidney procedures.

“The buzz, camaraderie, friendship, the sense that we are all in this together, every medal is a medal for the team,” he said. “It’s wonderful to see people getting their just rewards, the team has put in a lot of work this year and it’s paying off.”

Jack O’Brien (16), the youngest team Ireland member, bagged three medals at his first time competing in the games. The Navan-man won a silver medal in darts, a bronze in the long jump and another bronze in the 200m sprint.