Army rangers to begin deployment to Mali in coming days 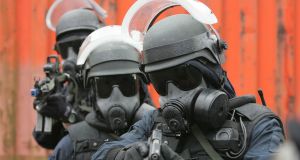 File image of members of the Army Ranger Wing during a training exercise at the Curragh Camp in Co Kildare. Photograph: Alan Betson

Members of the Army Ranger Wing, the special forces arm of the Irish Defence Forces, will depart in the days ahead on a deployment to Mali – deemed to be the most dangerous UN mission in the world.

Fourteen members of the Army Ranger Wing will serve with the United Nations Multidimensional Integrated Stabilisation Mission (Minusma) in the northwest African country.

The mission by the Army Ranger Wing was approved by the Dáil in June. Twenty members of the Defence Forces are currently serving in Mali as part of an EU mission training in bomb disposal and the clearance of landmines.

Minister of State at the Department of Defence Paul Kehoe, who met the Army Ranger wing personnel on Friday ahead of their departure, said the team deploying to the mission was a highly trained specialist force well equipped to operate in hostile environments such as Mali.

Mr Kehoe told the troops: “In helping to secure stability in Mali, you will be contributing to the security and stability of the wider G5 Sahel region [made up of Burkina Faso, Chad, Mali, Mauritania and Niger]. The region is a source of much criminality including people-trafficking and smuggling. Such criminal activities threatens security in the entire region and beyond, including the European Union.

“Through this deployment also, Ireland has the capacity to enhance the effectiveness of this UN mission and to contribute to security and stability in this key region in support of the UN, the EU and Ireland’s development aid programme.”

Minusma was established in 2013 and since then 195 UN personnel have been killed working on it. It is understood that the Army Ranger Wing would operate as a team to carry out surveillance and intelligence gathering operations.

Informed sources said they would deploy as part of a larger German-led intelligence surveillance reconnaissance company, would not operate in isolation and would benefit from all the protections and medical support in place for the larger company.”