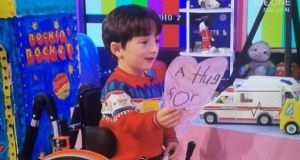 Adam King from Cork explained his drawing of a ‘virtual hug’ when he appeared on the RTÉ Late Late Toy Show recently. Photograph: Andres Poveda.

The little boy whose virtual hug went all over the country after he appeared on the Late Late Toy Show is set to see it travel all over the world in the form of a special Christmas postmark created by An Post.

Adam King, whose drawing of a virtual hug was shared with Late Late Show host Ryan Tubridy as he talked of his dreams of space travel, was one of the stars of the recent toy show.

The six-year-old from Cork also said he dreamed of commanding a space mission with Nasa one day. However, when asked if he would like to be an astronaut, he said: “I can’t be an astronaut because I have brittle bones.”

Tubridy asked if he would instead like to “be the guy with the microphone underneath, on the ground?”, prompting Adam to show him how to properly count down a space launch from 12 to one.

Young Adam King stole our hearts when he appeared on RT’s @thelatelateshow Toyshow with his Virtual Hug 🤗 Now An Post is helping Adam share his virtual hug across the world with a special postmark which will be applied to millions of Christmas post from Dec 12th 🎄 #SendLove pic.twitter.com/bGl7NCLllo

He posted a video clip of Adam’s appearance on Twiter and addressed him personally.

“Adam - I’ve been lucky enough to CAPCOM many spaceflights. We should talk space together. Take care, be good.”

Last week on the Late Late Show the former astronaut surprised Adam, who made a second appearance on the show via Zoom.

Tonight, for the third Friday in a row, Adam appeared on the show as An Post announced plans to share his virtual hug across the world by transforming it into a special Christmas postmark.

“Adam’s Hug will be applied to millions of Christmas cards and letters during the sorting process from Saturday 12th December, carrying a special message of love across Ireland and the World this Christmas and New Year,” Richard Miley of An Post Mails & Parcels said.

“We’re big fans of Adam and his virtual hug. As we all send love this Christmas, this special hug on every envelope keeps us all connected, even if we can’t hug in person this year. Thanks Adam, for making the world a whole lot brighter this Christmas.”