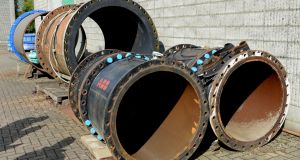 In draining sewage in the dewatering beds, the council has seen improvements in the quality of water in rivers and local water courses. Photograph: David Sleator

Tipperary County Council has cut costs of waste water treatment by almost €250,000 a year, while improving waste discharges to local rivers, lowering its CO2 emissions and getting a payback from the ESB.

The pilot project in eight small regional waste treatment plants has been so successful that it now may be copied across the county and other local authorities.

The dewatering beds are also fitted with stainless steel, louvred doors that allow liquid content to drain without solids.

The pilot project began at small plants in Twomileborris and Borrisoleigh, and the result was a much-reduced, dried sludge, which was taken by lorry to a sludge digester at Roscrea, where it is used to run a combined heat and power plant. Excess energy beyond that which the council uses to run the Roscrea plant is then sold to the ESB, which credits the local authority, thus reducing the authority’s electricity bills.

According to Mr Moran the reduced haulage costs alone are about €200,000, while additional saving have been made on a reduction in the use of gas, which was previously used to start the combined heat and power generator.

In draining sewage in the dewatering beds, the council has seen improvements in the quality of water in rivers and local water courses.

“There is also the carbon emissions benefit of not having so many lorries on the roads,” he said.

Mr Moran added the dewatering beds have become a place of interest for environmentalists and educational school tours. He said he hoped to see the system introduced in all smaller waste water treatment plants across the county and the country.