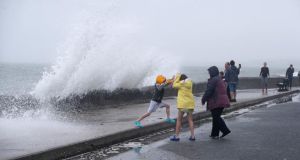 People are hit by waves on the Front Strand in Youghal, Co Cork on Wednesday. Photograph: Niall Carson/PA Wire

Thousands of homes were left without power in Cork, Waterford and Tipperary while there were reports of flooding in Skibbereen.

Met Éireann issued a status red weather warning – its highest level of alert – for Co Cork where it predicted the worst effects of the storm would be felt over the three hours to midnight.

The storm was expected to bring “very severe and destructive winds” reaching gusts of 130km/h, it said. People camping or holidaying in caravans along the southern and western coasts were advised to seek alternative shelter indoors.

The rest of Munster, and counties Galway and Mayo were subject to status orange weather warnings, with the remainder of the country put on a lower-status yellow alert. Both of these warnings are to remain in place until this morning, with heavy rainfall due to follow the storm.

Local authorities in affected counties put up flood defences in preparation for the severe weather, and advised people to remain indoors overnight. In particular, coastal areas were expected to see violent storm force 11 winds, bringing large waves and a risk of flooding.

Council staff were preparing to respond to significant damage, such as local flooding, as well as fallen trees blocking roads.

In a statement, Cork County Council said “due to the combination of storm surge, spring tides and onshore winds, there is a potential risk of coastal flooding, particularly in the west Cork area”. The local authority said heavy downpours could also lead to risks of inland and river flooding.

Bus Éireann suspended all Cork services from 8pm until 1am. The Irish Coast Guard urged people to keep away from coastal areas.

The National Directorate for Fire and Emergency Management’s crisis team met to discuss the approaching storm.

In a statement afterwards, the group said ESB Networks were preparing for power outages with staff on standby to repair faults.

Minister for Housing and Local Government Darragh O’Brien warned those holidaying at camping sites along the coast to consider moving to safer ground.