The Question: Has Trump handed 21st-century dominance to China? 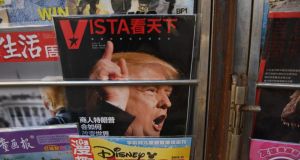 A magazine featuring a cover story about US President-elect Donald Trump at a news stand in Beijing this week. Photograph: Greg Baker/AFP/Getty Images

In a YouTube address last Monday, US president-elect Donald Trump vowed to pull the US out of the Trans-Pacific Partnership (TPP) on his first day in office.

This fits with his anti-free trade rhetoric during the election campaign, a key part of his appeal to white, working-class communities in the states that have suffered the worst from declining US industry.

Ditching the TPP, therefore, appears like an easy way to reward those voters – and sets the tone for the rest of his administration.

However, the big winner from Trump’s decision is unlikely to be the struggling working class of Michigan or Wisconsin, but rather Beijing.

The TPP, a deal between 12 Pacific Rim countries comprising 40 per cent of the global economy, was specifically designed to isolate China and entrench US influence in the area.

About 18,000 tariffs would have been reduced, but it also established common labour rights, including the right to unionisation and a minimum wage, and environmental standards – areas in which China has not traditionally been a champion.

With Trump’s announcement, however, the pendulum has swung back to Beijing, which is moving ahead with the Free Trade Area of the Asia-Pacific (FTAAP) and a 16-member Regional Comprehensive Economic Partnership (RCEP), which includes India.

Progressives have long been dismayed by the manner in which trade deals prioritise corporate interests over workers’ rights – criticising the undemocratic lack of transparency, and there was certainly much to be concerned about in the TPP.

A zero-sum view of globalisation sees China or Mexico “winning” while the US “loses”, but the reality is that trade deals typically reward corporations at the expense of labour.

The TPP’s provisions on labour rights and minimum wages were its most admirable aspects, and are unlikely to be matched by the RCEP, say.

In the long term, Beijing’s eagerness to step into the vacuum left by Trump is likely to have far-reaching consequences for China’s 21st-century dominance, rather than the employment prospects of the US working class.

1 US passengers fly into Dublin: ‘I’m here for six days. I guess I’ll have to stay inside’
2 Travel rules unlikely to include mandatory quarantine or cancelled flights
3 California shuts down again as US coronavirus cases surge
4 Covid-19: 200 to 250 people arriving in Ireland from US daily - Coveney
5 Cowen under pressure to answer further questions on gardaí encounter
Real news has value SUBSCRIBE